Saying Goodbye to David in the rain

(The link to the CBC live coverage has been closed.)

Dark clouds and rain on one side of Kensington Oval, blue sky and sun on the other.

END_OF_DOCUMENT_TOKEN_TO_BE_REPLACED

Hero: Barbados-born police woman shoots it out with robber in Brooklyn, New York

Barbados-born New York City police officer Feris Jones was getting her hair done last Saturday at Sabine’s Hallway beauty salon in Brooklyn when a wild thug burst in with a .44 Magnum pistol and screamed at the four women in the shop to turn over money and jewellery.

“If the officer wasn’t there, things could have gone very differently”

“Thank God she was there, he was fully loaded. It all happened in a blur. We were on the ground, and the shop is not large at all. My ears are still ringing.”

Officer Jones quickly reacted. She stood up from her chair, told the other women to get down, announced she was a police officer and ordered the thug to drop his weapon. Somewhere in there Jones took out her own pistol and when the thug opened fire she shot twice. “Jonesy”, as she likes to be called, actually shot the gun out of his hand like you’d see in the movies!!!

The injured robber, one Winston Cox, ran off and was later arrested hiding out at his mama’s place like the true coward he is.

Blood all over the place, screaming and deafening noise in the little shop and Feris Jones kept her cool and did her duty. Mayor Bloomberg and Police Commissioner Ray Kelly announced yesterday, Tuesday, that Officer Jones is now promoted to Detective. END_OF_DOCUMENT_TOKEN_TO_BE_REPLACED

Hartley Henry declares that he made David Thompson ‘King’ 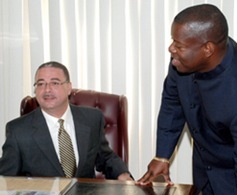 With the death of Prime Minister David Thompson early last Saturday, Henry yesterday declared: “The kingmaker dies with the king”.

“My tenure ends with David Thompson, so I am not going to work with anyone else,” he said last night in an exclusive DAILY NATION interview.

Hartley Henry as quoted in The Nation article: Henry quits

Is anyone else as puzzled and astonished as we are about Hartley Henry’s comments and the timing of his resignation?

We know Henry played a role in the DLP and in advising David Thompson before the 2008 election and during his tenure as Prime Minister, but “kingmaker”? Henry’s comments seem impolitic at best during a week when people want to remember David Thompson and his accomplishments and life. It is strange to see Mr. Henry stand up now and take credit for David Thompson’s success.

Why talk now? Why resign now?

Why not wait until the Prime Minister is at least buried before focusing the public on yourself and your own career and agendas?

Oh well, it’s not like Hartley hasn’t been impolitic before.