The developer of the Caribbean Splash Waterpark in Barbados, Matthew Kerins, placed the following newspaper advertisement on September 13, 2006. BFP has transcribed the advertisement and posted both the transcript and scans of the advert here for all to see.

LET THE TRUTH BE TOLD

As my grandmother Sissy once said, “If you want to catch snakes in a cane field, then light a fire”

It amazes me that 99% of every article printed by the Nation Newspaper in the past concerning the proposed development of a water park at Graeme Hall in Barbados is decidedly negative. Their articles are based on innuendo, gross misrepresentations, scare tactics and giving a platform to various ill-informed individuals to write negative articles. This is called media manipulation!

In a Brass Tracks radio interview program titled “Not in my back yard” which pertained to my water park, Mr. Peter Simmons inappropriately reminded the Prime Minister of who lives on the Graeme Hall Ridge. Furthermore, in an article pertaining to a community meeting printed July 20th in the Nation Newspaper by Hartley Henry, he states, “In Barbados, you simply do not fight and expect to triumph over the kind of people I saw in that audience.” I would ask Mr. Hartley Henry and Mr. Peter Simmons to choose their words more carefully since it sends a message that Barbados is an elitist democracy which it is not. I would also like to assure Mr. Hartley that I did not come to Barbados to fight or be a punching bug. Only to bring Barbados with a tourism venue no other Caribbean island can boast of having. More importantly, it will bring a unique experience to Bajans and tourists alike to interact with their families in a wholesome manner.

An article printed in The Nation Newspaper on October 8th states, “A New National Park is being proposed which will be for the birds by the Friends of Graeme Hall.” Sweet sounding words cloaking a hidden agenda for the aspirations of a few, at the expense of many perhaps?

I shall address Mr. Allan Marshall since it is apparent that he is the front man along with being a newfound environmentalist who by happenstance also lives on Graeme Hall Ridge. First, my company has two areas of expertise, as a developer and also to prevent or solve environmental problems. My work in this specific area is for the preservation of the Fire Island National Seashore which is a Federal project and the protection and preservation of marshlands for New York State and many local communities. I welcome and encourage you and The Friends of Graeme Hall to read the letters I have from the United States Federal Government, State of New York and local community governing boards attesting to the fine work my company has Contributed in these areas. I also respect the Graeme Hall Bird Sanctuary in its present form and that is why my company is spending over a million dollars in extra incremental costs for its protection. (Two desalinization plants and a new technology to prevent the use of chemicals.)

I have read your statements about the extreme sensitivity of the bird park environment. I would like to ask you when the sewage treatment plant dumped 3-4 million gallons of raw sewage waste into the bird sanctuary recently, why was it not destroyed if it is so sensitive? Don’t forget when the sewage treatment plant was being built they had to pump out one million gallons of water per day from the underground fresh water springs in order to lay the foundation. The Ministry of Agriculture, which is next to the bird sanctuary, has been using pesticides and fertilizers for many years which filter into the bird sanctuary. The surrounding homes use suckwells which means the sewage goes into the ground with a portion going into the bird park. The bird park is still alive and kicking, Mr. Marshal, and for good reason. The environment has a propensity to cleanse itself. The Graeme Hall Bird Sanctuary is continuously being cleansed. Anybody that drives by the bird park can easily see the lock by the ocean that brings in fresh sea water which is also subsidized by underground fresh water springs.

May I ask if you are going to force homeowners to install costly septic tanks in the future, will you be petitioning the Government to force the Ministry of Agriculture to leave, will you be petitioning the Government to shut down the sewage treatment plant? I know that 20% of the homes at Graeme Hall are already zoned for commercial use. Is your friendly committee going to have their zoning status changed back to private use only? Are you going to change the tourist zone designation of Graeme Hall Bird Sanctuary? Let the facts be known!

You and the people you represent are using The National Park epiphany as a smokescreen . This is a blatant and brazen attempt at a large scale land grab that will be at the great expense to the pocketbooks of the general population and certainly to the detriment of your country. I doubt very much that you will fool many Bajans with this ploy. Heaven help us all if you and your cabal are forced to look down and watch Bajan families enjoying themselves at the Water Park or perhaps it would be the appropriate penance for this friendly Committee. But if the friendly committee planning to buy the 120 acres you desire at Graeme Hall for fair market value at $20.00 per square foot which would total $104,544,000.00 I wish you the best. Enjoy your view on the Ridge!

Here are the scans of the advert. We had to do it in two passes as the ad was too long for our standard scanner… 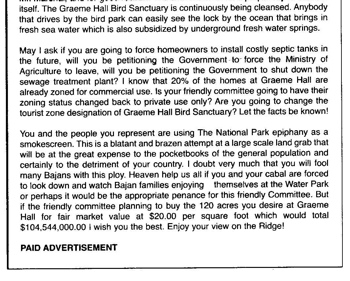 Tell the world what you think about this!