As the end of the year approaches, Barbados Free Press is making ready to celebrate our second anniversary on January 17th – and if the current traffic patterns hold we will welcome our 2 millionth visitor a week or so before the anniversary.

Frankly, we are all amazed that the blog is still here and that none of us has been tagged by an increasingly aggressive government campaign to shut down this venue for free speech and Bajan democracy. We’ve been up and down a few times due to well-coordinated cyber attacks and some scary incidents – but despite all the government threats and actions we are still at our keyboards.

It hasn’t been without an exciting moment or three. Many BFP readers will remember that one night when we had to take the blog down and move some equipment in the wee small hours… (Out the back quiet and small as a church mouse and into a friendly taxi at the standpipe)… but it was a false alarm, or at least it seems that way now. On that night we truly understood the meaning of the old Chinese curse “May you live in exciting times”.

Thanks to Clive coming on board we learned about proxies, VPNs, whole disk encryption, “magic” tunnels and some other tricks that we’ll keep to ourselves for now – and so far we’ve managed to keep ahead of the highly-skilled technical team that has been hired by the Barbados government to find us.

But if we ever do go down for more than a few days, readers should know that BFP’s data exists in more than one place and in more than one continent. It may take a week or so to get rolling again but we promise that we will not stop Barbados Free Press until our country is free of the corruption that is dragging our nation down, stifling the news media and destroying the future for all our children.

Back on January 17, 2006, we published our first article Prime Minister Owen Arthur Opens a New Can of Paint – To Cover Old Corruption.

Sadly, much of what we predicted in that and other articles has come true in the past two years as the current BLP Government has taken corruption to a whole new level. 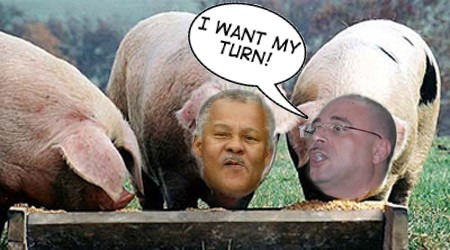 Without Effective Integrity Legislation, The DLP Piggies Will Be As Bad As The BLP Piggies

We are not optimistic that things will change that much should the DLP and David Thompson form the next government. Both parties have promised integrity legislation and conflict of interest rules in the past, but neither carried through because the politicians on both sides don’t want laws that will limit their ability to profit from public office.

The current “Hardwood” rants of David Thompson are merely another example of the opportunistic politics that have happened many times in the past. Thompson and the DLP could have declared and implemented their own integrity and conflict of interest rules at any time in the past two years, but they chose not to.

The DLP could reveal their entire proposed legislation package now so Bajans could examine and better judge their current promises – but they choose not to. Some would say that this is “political strategy” on the part of the DLP, but we think it is because their new legislation has holes so big you could drive a SSA truck through it.

The holes are there for a reason, friends.

We wish we could be more optimistic, but nope – no matter who wins the coming election, we have a feeling that Barbados Free Press and the other Barbados anti-corruption blogs will be needed for a long time to come.

Filed under Barbados, Blogging, Freedom Of The Press

Kingsland Law Suit: “Big Story” Is Being Held By Keltruth Blog For Fact-Checking

Barbados Free Press has been following the story in Canadian court of fraud allegations against Prime Minister Owen Arthur, Chief Justice Sir David Simmons, David Shorey and a host of other Bajan big-ups (and some rather major firms like Price Waterhouse) who all face charges in Canadian civil court in relation to Bajan lands known as Kingland Estate.

For some background you can see BFP’s previous articles…

Keltruth Blog is a fairly new addition to the Barbados blogosphere and they have been making waves by web-publishing official court documents relating to the Canadian lawsuit. Hey… its becoming tougher every day for the defendants in the Canadian lawsuit to say there’s nothing to the case when the official legal documents are posted on the web for everyone to see!

The government’s spin-masters even said a few months ago that the lawsuit had been thrown out of court in Canada. Ha… typical government lies – the Canadian court case gets more and more interesting with every new report.

Now the folks at Keltruth have posted an indication that a major story is about to break on their blog – and that the defendants in the case know it is coming. Here is what Keltruth Blog posted today…

“Coming: Many of you, especially if you are a defendant, know that Keltruth Corp. is sitting on a big story. Please be patient, as this is an extremely sensitive matter. Before this story can be published, it must first be checked and then double-checked against the facts.”

… posted at Keltruth Blog – an indication that a major story is about to break and that the defendants in the Canadian lawsuit (Barbados Prime Minister & Chief Justice etc.) know the story is coming.

What Could The “Big Story” Be?

No surprise – the Barbados media have completely ignored the story of Canadian court fraud allegations against the Prime Minister and Chief Justice. Yup, even with the court documents posted online at Keltruth Blog and available for public viewing through the Canadian courts, the Nation News and the CBC aren’t about to touch that story! (It must really suck to be a “journalist” working for the Barbados media and not be allowed to report news that the whole island is already talking about.)

So what is this new “Big Story” about the Kingsland court case that is being held by Keltruth Blog for fact-checking?

We haven’t a clue, but like everyone we’re anxiously awaiting the next chapter in a fascinating news story about corruption and fraud at the highest levels of our government.

You’ll have to read about it on the blogs folks, because the regular media isn’t allowed to talk about our Prime Minister, Chief Justice and Attorney General all being charged in a Canadian court with fraud in relation to land dealings on Barbados!