First Vote Cast In Barbados Election! (Someone Call The SSA To Tally The Results) 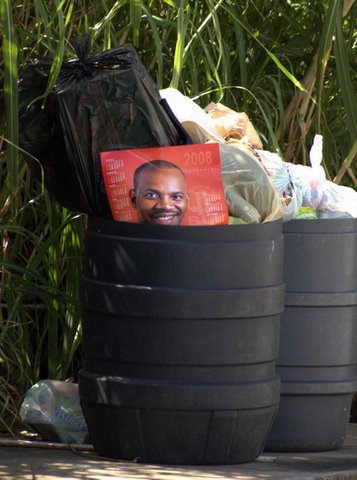 Do We Believe Tourism Minister Lynch Or His Ministry Officials?

“Things Are Great” vs. “We’re In Trouble”

‘Lynch stated that over the past five year, no less than 15 new airlines had been welcomed into the island’.

‘For the first time ever, if you come to Barbados on any afternoon around this time, you are likely to see as many as seven wide-bodied planes on the tarmac, and that this was an indicator of the continued growth of our tourism sector’.

‘In 2007, Barbados air transport sector suffered a number of challenges as a result of losing the services of four airlines’.

‘It was noted that one new airline was introduced during the year, Caribbean Airlines which replaced BWIA, leading to a total of 13 airlines operating into Barbados’.

‘During the first nine months of the year, overall capacity decreased by 67,519 seats or six per cent’.

‘Passenger arrivals decreased by one per cent’

The source of the above information (11th December) ‘was outlined in a document prepared by the Ministry of Tourism’.

So who do we believe, the Minister or the Ministry?

Russia’s Putin Has “40 Billion In Secret Offshore Accounts”… How Much Has Prime Minister Owen Arthur In His Offshore Bank Accounts?

One of the first articles we published at Barbados Free Press was Barbados Prime Minister Owen Arthur: His Secret Bank Accounts, Stock Portfolios.

In that article almost two years ago we said…

“Barbados Prime Minister Owen Arthur has bank accounts and shares in public companies and private business ventures that he keeps secret from the electorate and the Legislature.

Owen and his companions are able to do this because Barbados has no requirement for Government Ministers, elected members or their immediate families to file financial statements with a Conflict of Interest Committee or other body of public oversight.”

With an estimated 40 BILLION dollars (yup… that is with a “B”) hidden away in a network of offshore accounts, Russian leader Vladmir Putin has proven himself to be an expert Piggy at the Trough.

But don’t forget: Putin’s skill at being a thief of public funds wasn’t the sole or even primary reason for this huge offshore stash. Russia is so huge that Putin had an enormous trough to feed from. The idea for a crooked politician is to take only a little at a time from one location or project, but if the country and the projects are immense “a little here and there” can soon add up!

Unfortunately for Putin, today the news media is reporting that his offshore companies and funds are becoming public knowledge…

Asked how much Putin was worth, Belkovsky said: “At least $40 billion. Maximum we cannot know. I suspect there are some businesses I know nothing about.” He added: “It may be more. It may be much more.

“Putin’s name doesn’t appear on any shareholders’ register, of course. There is a non-transparent scheme of successive ownership of offshore companies and funds. The final point is in Zug [in Switzerland] and Liechtenstein. Vladimir Putin should be the beneficiary owner.”

… from the Guardian article Putin, the Kremlin power struggle and the $40bn fortune

The economy of Barbados is a wee bit smaller than Russia’s, but that just means that Owen Arthur’s and his compatriots’ offshore funds are in the millions, not the billions.

How did Owen and his friends get the money into the offshore accounts?

The crooked politician then has a front man establish a “consulting” company offshore of Barbados. Perhaps in Europe or New York… or New Jersey. Then the government orders a $200 million dollar prison from (for instance) VECO. If there is a 10 percent “cost overrun” that would be about… hmmmm 20 million dollars. A fine sum! (You have to understand, folks. These numbers are only estimates because Owen Arthur & Company NEVER publish any financial records for the public to see. Think “Hotels & Resorts” and you’ll get the picture!)

VECO builds the prison for the government, but it has to purchase building materials from various companies abroad. VECO also subcontracts various engineering and “environmental” research to other companies.

Some of this “research” or “materials handling” is performed by foreign “consulting” companies established just for this one project!

Get it? Some of the offshore “consulting” and materials handling companies were owned by the same Barbados politicians that awarded the government contract to VECO! These companies don’t really do anything except collect kickbacks from the government supplier.

And THAT is how Prime Minister Owen Arthur and his buddies make their offshore monies. Of course, like Putin, the companies and the bank accounts are not in the politicians’ names directly. Usually it is handled by an offshore lawyer.

Heck, that’s just like what our Barbados offshore banking industry does for people from North America and Europe!

Owen Arthur is no pauper. Neither is his ex-wife. The reason is simple: the first Mrs. Owen Arthur had some knowledge of his offshore holdings and she turned that knowledge into a sizable chunk of cash in exchange for silence.

And now Opposition David Thompson has stated that DLP candidates will declare their assets openly.

Can Owen Arthur? NO WAY!

Will All The DLP Candidates Declare Their Assets In Detail?

DLP Leader David Thompson promised that he and ALL his candidates would openly declare their assets when the election was called. We don’t expect this to happen before Christmas because Thompson has enough sense to let folks have their family times, but the DLP should be aware that Bajans will not accept some last minute weaseling half-baked declaration at the last minute.

For the DLP to retain any credibility at all on the integrity and conflict of interest issue, their candidates must publicly state their assets in detail. The DLP website would seem to be the proper venue if Thompson is serious.

Of course, Thompson and his team have had two years to move assets around to wives, sons, daughters and siblings to “hold” any of their embarrassing assets, so this declaration is little more than an election gimmick.

For Thompson and the DLP, the failure to embrace integrity legislation and conflict of interest as a foundation of the party’s platform a year ago – and the relegation of such an important matter to a last minute election trick pony – will probably cost them the election.