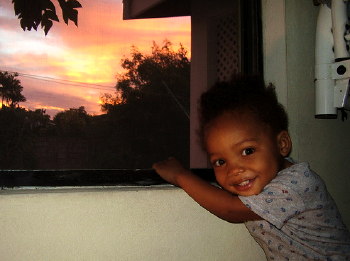 “I say let traditional media die. I think they were mandated to be the public watchdog, but in fact serve corporate and political interests with far more alacrity than they do the interests of the common man.

I think blogs and blogging and other online mediums can and should take the place of traditional media, if only because it saves trees… but also because having been a journalist, and in fact a member of this Caribbean Collective, I do not think that traditional journalism is doing the job anymore and it’s up to those of us who have the will and creativity to write, to speak out.

… from The Death Of The Caribbean Media House by Caribbean blogger Sun Goddess.

Our friend Sun Goddess is a big Second Life fan. I don’t know where she finds the time to SL, let alone time to blog, be a mommy and “real” work. But we are thankful that she does take the time to blog because it is always a worthwhile visit.

Oh… the little one?

He’s Dayo and he rates about a 15 out of 10 on the “cute baby” scale. Sungoddess caught him discovering the sunrise. Look at that smile and enthusiasm for a new day.

If you could bottle that, you’d make a fortune.

Keep smiling Dayo and the future is yours!

David over at Barbados Underground says that Tourism Minister Noel “Barney” Lynch probably has the most important job on the island – seeing how everything we have is based upon a tourism foundation.

So how has old “Instant Millionaire” Lynch been doing?

Not A Word About A Billion Dollars In Government Project Overruns!

Can you hear the train coming folks? The government is trying to keep us from noticing until the election is over, but the express train called “Pay The Piper” has been barreling down the tracks for some time now towards a car called “Barbados” that is stuck at the crossing.

Billions of tax dollars wasted in overruns, bribes and failed projects due to government mismanagement and corruption – with the burden going on the backs of Bajan taxpayers.

Now times are getting bad and there is nothing in the kitty to get us through a lean period. Who’s to blame?

Do the fat rich bastards in charge of the banks mention the outlandish government spending and corruption?

Forget about Christmas, little people. Never mind those parties! Just work yourself to death to support the massive debt that the BLP Government has incurred for you and your children and your grandchildren.

Excerpts from The Nation News…

END_OF_DOCUMENT_TOKEN_TO_BE_REPLACED

“No one asks questions when a white man owns property…”

“When we set up King Properties seven years ago we agreed that it would be best if I became the face of the company. You know what it’s like here; no one asks questions when a white man owns property,” he said sheepishly.

Natasha hated to admit that there was some truth to his claim. “So he used his middle names to prevent people finding out his link to the company?” she queried.

… from the romantic novelette “Trading Hearts“ at Cheese-on-Bread! blog