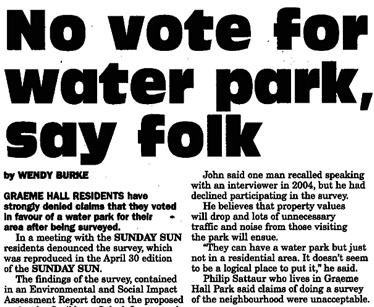 If The Developers Faked A Resident Survey, What Else Is Not True?

Local residents are charging that the developers of a proposed water park in Graeme Hall, Christ Church, Barbados, faked the results of a published survey and are using unethical methods to control information and to limit public debate.

The proposal by Caribbean Splash Inc. to build a multi-million dollar water park in the Graeme Hall watershed seems to be running into trouble on a number of fronts.

As we reported in our earlier article Barbados Water Park Battle On The Horizon – Graeme Hall Wetlands In Danger, a negative Environmental and Social Impact Assessment Report recommended that another location be found for the water park – but the developers and supporters in government appear to be forging ahead anyway.

How do we know that Caribbean Splash faked the results of a residents' survey? Easy…

First, according to newspaper articles, many named residents in the area were never surveyed even though Caribbean Splash Inc. claims that residents were. Other residents we spoke with say they talked to someone but were not told that a survey was in progress. That should be a full stop right there.

Second, anyone who lives in the area, or who has spoken to any resident of the area knows that a figure of 67% resident support is totally absurd. There is strong and widespread local resistance to the project.

If water park developers want to have their survey considered, they should provide a copy of each resident's responses to that person. Let each respondent read what they are supposed to have said during the "survey" that few can remember happening.

What questions were asked? What was the preamble before the survey? Do the developers even have the names of the persons they claim they surveyed? If not… that says it all. 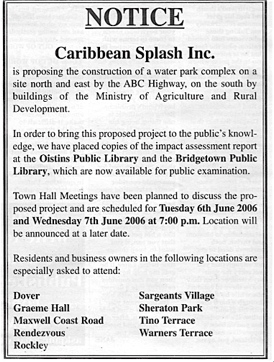 The Caribbean Splash Inc. newspaper announcement first told of a Town Hall meeting scheduled for June 7, 2006 at 7pm at a "location to be announced at a later date".

No location was ever announced.

To our knowledge, a location was never announced for the June 7th Town Hall meeting. When people started asking about the location a few days prior to the scheduled June 7th meeting – WHAM! – Caribbean Splash Inc. announced at the last moment that the meeting had been postponed "…to allow more time for the public to assess the project" (Barbados Advocate link)

Perhaps Caribbean Splash Inc. was starting to hear that the Town Hall meeting was going to be a public relations disaster. As we indicated in our May 2, 2006 article (link here)…

"Hummingbird says that some factions intend to use the June Town Hall meeting as a dog and pony show to allay fears without having to answer the serious technical questions raised in the Environmental and Social Impact Report. (We will see about that!)"

Caribbean Splash Inc. announced that the Town Hall Meeting will now be held on Monday, July 10, 2006 at…. um, ah…. someplace, I guess.

Where is the meeting to be held? Big secret. No one seems to know, but they had better rent lots of chairs. Lots.

More monkey business surfaced when a few Bajans decided to attend at the library to examine the impact assessment report as indicated in the Caribbean Splash Inc. newspaper notice.

What a surprise! Only one copy at each library – a grand total of two for the entire island. Not to be removed and not to be photocopied.

That's correct, folks. The librarians had instructions from Caribbean Splash Inc. that no photocopies were to be made – not even of sections that, for instance, a citizen might want to bring to the "Town Hall Meeting"

Developers of the proposed water park seem to be in a defensive "spin-control" mode in response to strong community resistance. If they think that they can limit public information and debate – and then slide this thing along under the radar, they are going to be very surprised.

And that goes double for the developer's Government co-conspirators who are for some unexplained reason determined to turn prime agricultural land into a water park – even if it destroys the last remaining mangrove wetlands on the island.