I have noticed that you are steering clear of the situation where the Comptroller of Customs is holding on to the vehicles of poor black people in the port and not releasing them.

This is as a result of the established car dealers falsely claiming that there is "underinvoicing" which no one at present is able to substantiate.

We haven't been "steering clear" of this issue – we just haven't had the time to really look at it – although the idea has been tossed around at a few of our drinking parties editorial meetings. It would be appreciated if you could send us a page or two on how you see the situation, and some of the specific indicators you might be aware of that would support your position.

We will then do a little more research and try to do the story justice.

Many thanks for your interest in our work.
Marcus & the gang.

Here are some excerpts. See the link above for the full report…

The Barbados Court of Appeal has upheld a High Court decision ordering the Customs Department to release a number of imported vehicles held in the Bridgetown port since last year.
…

Lawyers for the Crown Senior Counsel Anika Jackson and Hanoman Singh filed the application for a stay of execution to allow the Customs Department to keep the vehicles in the port.

They have been arguing that they need more time to carry out their investigations and were asking for a six week stay while they continued to investigate an alleged under invoicing scam involving some importers of used vehicles.
…

The session lasted for over two hours before Sir David confirmed Madame Justice Kentish's order for the vehicles to be released upon the payment of a guarantee.

The matter first arose after the importation of eighteen Toyota Trucks by the Belleville based subsidiary of Mohammed Motors said to be worth one point six million dollars.

The Customs Department has refused to release a number of these vehicles since December last year.
…

In all used car importers are contending that they have at least three hundred vehicles held up in the port valued at over 12 million dollars.

Partner with Shazar Distributors Dr. Abdul Mohammed says the action has resulted in significant losses for his company. He says he has had to lay off thirty-seven people because of the impasse.

Sometimes I get so angry, but other times I just want to weep – for the tragedy of Barbados citizens whose expectations have been driven so low that they are reduced to being grateful for a plastic water drum.

Scraps tossed from the table of those who are spending a third of a billion dollars on a few weeks of cricket.

We are having an interesting discussion about water here at Barbados Free Press and throughout the island – and we are all talking in the dark because the government reports on water quality, water loss and distribution issues just don't seem to be available for interested citizens.

The government could place every water report online tomorrow at the Government Information website if it chose to do so. Let us see the water quality reports. Let us see the distribution leakage reports – and the quality reports of samples taken from the taps at the end of 150 year-old watermains. (Dr. Duguid of the Barbados Labour Party explained in earlier comments that some of the water mains are over 150 years old)

In a previous article, we had talked about sewage impacting the natural ground water supply and were taken to task by some readers. Now, some of the same readers who took us to task for stating that sewage was a part of "nutrient enrichment" contamination of ground water are telling us that indeed, there is a problem with water-borne sewage from My Lord's Hill contaminating the ground water supply.

And around and around we go – all of us seeking to interpret snippets of information from newspaper articles as the government limits information to selected 10 second soundbites during photo-ops.

After 12 years of a Government in power…

No new piping. No new standpipes. No new sewage disposal system. For years, some poorer residents have been storing their daily water in open buckets, with the associated health and sanitary problems.

Now… years later, the Minister of Social Transformation and MP for the area, Trevor Prescod, shows up with 50 gallon blue plastic water drums.

"Here you go folks! Free! And the drums are very special… they have lids and faucets! You lucky lucky people!"

A government that is twelve years in power. A third of a billion dollars and more being spent on cricket. Millions and millions lost in the GEMS of Barbados hotel scam. Dozens of government projects that have come in at 300% over budget like it is just a normal event.

Millions and millions for one folly after another by a Government that is twelve years in power – but no clean water and no plans for clean water for the unfortunate working class Bajans at My Lord's Hill.

"Just drive by and toss some plastic water drums off the back of the BLP party truck. That should hold them past this next election"

Scraps tossed from the table.

photo credit: The Nation News, under the "fair-use" provisions. 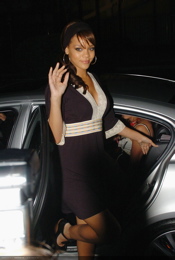 Our sweetheart Robyn Fenty – otherwise known as Rihanna – has been a busy girl lately. Here is what she's been doing for just that last week…

After performing at the Video Music Awards Japan, she wowed them in Sydney, Australia. Sunday saw her on the Rove Live TV show, then to New York City for the CFDA Fashion Awards on Monday night. Yesterday, she hit Los Angeles for the MTV Movie Awards and an appearance on The Tonight Show with Jay Leno.

With a schedule like that, we hope that whoever is looking after our girl remembers that without time to rest and relax, young performers can burn out professionally and personally. Ya hear, there?

The Barbados Advocate has published a rant by an unidentified columnist who uses the word "Negrocrat" as a racially-based negative term in describing Democratic Labour Party members, supporters and elected representatives.

We of the Barbados Free Press HATE this foul slur. As we stated in our article Of “Negrocrats”, “Oreos”, “Iggas” and Other Racial Slurs in Barbados – when Prime Minister Owen Arthur used "negrocrat" as a slur…

This from the Prime Minister of our nation!

But it is not just the PM and his political party who use racial terms to call others down. Opposition members have been guilty as well, and words such as “Oreos” (black on the outside – white on the inside) and “Iggas” have been heard to come from the mouths of our elected representatives.

Negrocrat and Uncle Tom In Barbados – A New Perspective…

Of “Negrocrats”, “Oreos”, “Iggas” and Other Racial Slurs in Barbados