Owen Arthur Cartoon #67 Most Popular Out Of Millions Of Posts!

How many folks around the world saw it?

If you missed the cartoon, click on the image below…

Therefore, we expect that they would have ensured that the interests of the region and its peoples were protected.

If, as they are now trying to have us believe, they were not fully apprised of the CWC negotiations, they really should not be running the affairs of the region.

For simply put, what Dr Davies, Dr Mitchell and Ms Mottley, who was vice chair of the Caricom security ministers committee, have now told us, is that they are guilty of dereliction of duty. 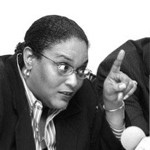 The editorial in The Jamaica Observer says everything we’ve wanted to say about the Deputy Prime Minister running for cover during her pathetic little speech last week. Except for the fact that Mottley is our Deputy Prime Minister and head of the CARICOM Security Committee, she sounded like some 9-year old telling the teacher “the dog ate my homework.”

We can’t explain it any better than the editorial writer at The Jamaican Observer, so take the time to read their excellent piece.

The Jamaican Observer: Claiming Ignorance After The Fact 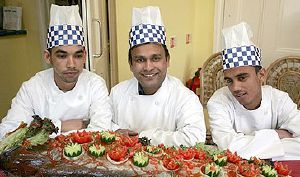 With much fanfare, the world’s most expensive curried fish takeaway is on it’s way from the U.K. to Barbados for a visitor’s Cricket World Cup party. The genuine Bangladeshi dish is to be flown 4,246 miles to Barbados from a Newmarket restaurant at a cost of about £3,000.

The takeaway is being supplied by British restaurant owner Sultan al-Mahmood who is flying with the dish to prepare it for some filthy rich businessman who we would never have heard of except for this fish.

“Proof That Millions Of Bangladeshis Are On Their Way To Barbados For Cricket World Cup!”

We expect that Barbados Minister of Tourism Noel Lynch will be all over this story. After all, he’s had a rough time lately with very little good news coming out of Cricket World Cup – but the curried fish story could give a little boost for a few days if he would play it out in his usual style.

Don’t forget – the Minister is not really concerned with the truth: that this is a simple story of a rich guy with more money than brains.

In the Tourism Minister’s hands, the story of this overpriced fish will become proof that millions of destitute Bangladeshis have abandoned their burger-flipping jobs in Miami and are now swimming for Barbados just to see some cricket.

Like everything else he has said in the past, it is all about taking one small fact and “thinking positive” to portray the imminent success of Cricket World Cup.

Too bad for the Minister that reality has now caught up with the years of hype.