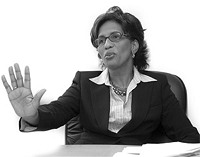 Those attempts to defend against the allegations were only partially successful, since there is little doubt that Nunez-Tesheira’s reputation has been damaged by the entire episode.  END_OF_DOCUMENT_TOKEN_TO_BE_REPLACED

CL Financial, CLICO bailout: The rot is deep, the corrupt keep their Code of Silence

“There was no agreement.  None at all.  For a loan exceeding one billion dollars…

Just imagine the Chairman who presided over the meeting of Clico Investment Bank’s Board which approved that loan… attempting to explain just what they were doing dispensing with depositors’ funds in that loose fashion.  I can scarcely wait.”

Testing the Code of Silence

The Code of Silence has formed the subject of several columns in this series.

I am referring to the unwritten agreement amongst the leadership group in our society to maintain silence in matters of white-collar crime.  The guiding principle of the Code being that the members of that group must never be exposed to the same scrutiny and penalties as the common criminal.

The Commission of Enquiry into the various financial collapses which have beset us – Clico, British-American, Clico Investment Bank, Caribbean Money Market Brokers, the CL Financial group and the Hindu Credit Union – was announced by the Trinidad and Tobago Prime Minister in her 1st October address to Parliament. END_OF_DOCUMENT_TOKEN_TO_BE_REPLACED

“A glaring example of the kind of wanton wrongdoing at the heart of this mess…  Clico Investment Bank fails to file its Corporation Tax returns for three years, yet keep their banking licence and arrange for the taxpayer to bail them out when it all goes sour.”

Where are the two-years past due audited accounts for CL Financial?

The new situation is charged with peril and one is reminded of Naipaul’s father, the intrepid journalist from ‘A House for Mr. Biswas’ whose favourite tagline was ‘…amazing scenes were witnessed…’.

Trinidad & Tobago Finance Minister, Winston Dookeran, addressed Parliament on the Finance Bill (No. 2) 2010 on Wednesday 24th November.  It was a lengthy and detailed statement, which put things into a necessary perspective.  For me, it was important that Dookeran gave priority to the claims of the contractors and of course, the last item being the claims being made by the various groups representing Clico policyholders.

The Finance Minister held his position as set out in the 2011 budget, which was no surprise when one considers his statement that the various submissions received from the policyholders’ groups did not withstand scrutiny.  I only had two significant concerns in terms of outstanding items which require proper attention. END_OF_DOCUMENT_TOKEN_TO_BE_REPLACED 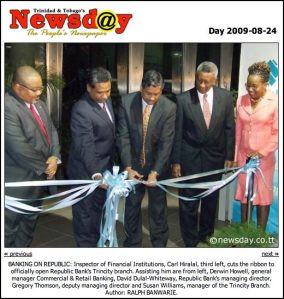 Sometimes things ARE as they appear.

An August 24, 2009 photo “Banking on Republic” in Trinidad & Tobago’s Newsday shows the happy Trinidad & Tobago Inspector of Financial Institutions, Carl Hiralal, having the honour of cutting the ribbon to open a new Republic Bank branch. (Oh, did we forget to mention that Clico owns 33% of the Republic Bank?)

The promotional message is clear: T&T’s Inspector of Financial Institutions is publicly declaring his approval of the Republic Bank and the bank personnel who appear with him in the photo: Derwin Howell, David Dulal-Whiteway, Gregory Thomson and Susan Williams.

There are other improper messages being delivered too… END_OF_DOCUMENT_TOKEN_TO_BE_REPLACED

When did CL Financial and CLICO actually collapse? Answer: Long before it was announced…

“Virtually $5.9Bn of CLICO Investment Bank assets seem to have vanished in a mere 13 months – a weekly rate of ‘withdrawal’ close to $105M”

In his latest article, our friend Afra Raymond makes a simple observation that other news media seems to have missed or deliberately ignored.

The House on the Corner Part II: More insights into CLICO Investment Bank

…This crisis was caused by an absence of risk management, excessive borrowing internally and externally to fund high risk speculative investments, and wrong financial reporting…”

The examination of CLICO Investment Bank (CIB) continues, based on the affidavits in the Central Bank’s winding-up action.

Firstly, as an overview, I consider the various versions of the accounts and their implications –

The House on the Corner

I am starting to look at the CLICO Investment Bank (CIB) and its operations, as revealed by the ongoing bailout.

CIB is a very interesting part of the saga, because even prior to the collapse of the CL Financial group there was a widely-held view that CLICO and CIB were parts of the group which were responsible for raising finance for their ambitious plans.  Even though the interest rates offered by CLICO and CIB were incredibly high – about twice the average offered by others – it would have been much more expensive for the CLF group to borrow those funds via loans.  The view was that the group had a legitimate method of harvesting funds on terms advantageous to them.

In April this year the Central Bank applied to the High Court to have CIB ‘wound-up’, due to its insolvency, estimated in that submission to be of the order of $4.7Bn.  That application to wind-up is being opposed by the NGC and the National Insurance Board (NIB).  Those matters are still before the Courts, which I only mention because the documents filed there give a disturbing insight into the CIB mystery. END_OF_DOCUMENT_TOKEN_TO_BE_REPLACED