Another cry for the Africa that could have been

How Robert Mugabe went from a man of the people to believing that he was God’s own gift to Zimbabwe, with a singular focus on maintaining his own power.

Quotes from the documentary, “Robert Mugabe… what happened?”

“The man’s hands are tied behind his back with wire.”

March 6 (Bloomberg) — Zimbabwe Prime Minister Morgan Tsvangirai was injured and his wife killed in a car crash today outside Harare, officials from his Movement for Democratic Change party said.

Tsvangirai was with his wife, Susan, a party official and a driver at the time of the crash, the prime minister’s spokesman, James Maridadi, said in a telephone interview from Harare, Zimbabwe’s capital. His injuries aren’t believed to be critical, Maridadi said.

“Morgan will be devastated” by his wife’s death, said Eddie Cross, a national executive member of the MDC, in a telephone interview from Harare. “They were very close.”

Tsvangirai’s vehicle was traveling south, heading for Buhera, his home district, where he was to address a political rally tomorrow, Maridadi said. It was hit by a large truck whose driver had fallen asleep, said MDC spokesman Nelson Chamisa in a telephone interview today…

(Thanks to a loyal reader for sending us the link) 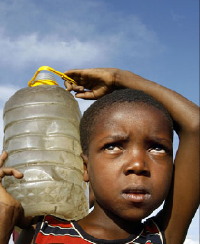 UPDATED: BANGO – Barbados Association of Non-Governmental Organisations says that no foreign or even African government should take over Zimbabwe even to save lives – and that Zimbabweans should sort it out themselves.

The BANGO blog also carries a stirring speech by Zimbabwean Army Chief of Staff Major General Martin Chedondo exhorting the youths to be ready to die for their country. BANGO supports the position “Right or Wrong, Black must always be correct.“

Hmmmm… I don’t think that Zimbabwe needs to be too concerned that the Western nations will invade tomorrow or any time in the next twenty years. They’ll send a few million every so often to ease their consciences – of which 70% will end up in Switzerland, 25% will be stolen locally and the remaining 5% will assist real people in need.

But the days of the big bucks Western support for starving people are gone for good in Africa and everywhere else. The lessons of Iraq and Afghanistan have been learned even if the USA and its friends can’t yet extracate themselves from that little mistake.

The boy in the photo might be dead or deathly ill as you read this. The Getty Images photo shows him carrying water from a possibly contaminated source to his family. But one needs water, so what is he to do?

Zimbabwe used to be called Rhodesia. The whites and and then the asians owned everything. Blacks were persona-non-grata in their own country. Skin colour classifications were encouraged by the British. Lighter skinned blacks were encouraged to “Learn a little English. Practice self-control” (apologies to Johnny Clegg & Savuka – God how I miss the times when I first heard Third World Child)

But everyone ate. There was no cholera.

Now everyone is “free” from foreigners. Yes, free from the foreign cash investments too! Free from education, dental and medical care, iPods and Windows Vista. Free from the Rule of Law… or any laws at all.

Mugabe was celebrated by all Africa even a decade after he had been proven to be a murderous despot. Ahhhh… but he was OUR murderous despot who vanquished the whites and asians so that the people could… could what?

But that is now. Tomorrow, the number of loaves will be fewer.

What Can Barbados Do To Help Zimbabwe?

Nothing. Not a G-damn thing that I can think of! We have neither the resources nor the political will to actually do something to help Zimbabwe. The time to act is ten years past. Now there is only a failed state and a generation of children who have been taught that might is right.

As we steel ourselves to say “Times are tough all over. We cannot help”, we should remember that people in Britain and the USA are saying the same thing about us.

Get ready friends. The next five years are not going to be pretty.