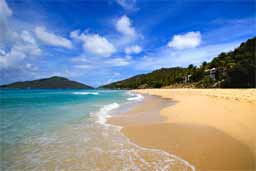 The sight of the Stars and Stripes being hoisted over the newly opened US embassy in Cuba last week, was one of the most visible signs yet of the diplomatic rapprochement between the long-term foes.

If President Barack Obama gets his way, the US Congress will soon go further still and lift its 55-year-old trade embargo on the island.

Such a move would be a major boon to the Cuban economy, not least by unleashing a torrent of big-spending American tourists on the island, which has largely been starved of such arrivals for more than half a century.

This, however, could prove disastrous for some of the small islands elsewhere in the Caribbean which are heavily dependent on tourism. They could see much of the US tourism trade they have come to reply on decamping to the large, and quite possibly cheaper, new competitor in their midst.

1.7 million American Tourists heading for Cuba in the first year when U.S. restrictions are lifted: US Travel Official

“Americans really want to see Cuba,” said Robert Whitely, president of the U.S. Tour Operators, which together with the National Tour Association also present at the event, handles 75 percent of all package tour business to the Caribbean.

… Reuters reports on a recent US-Cuba travel conference in U.S. travel industry gearing up for return to Cuba

Will US travel to Cuba impact Barbados’ cruise ship arrivals?

Barbados has never done the tourist business that many thought possible from the United States. Whatever the reasons for this it seems a fact that Barbados has been unable to capitalize on the huge potential US travel market as some of our Caribbean neighbours have done most successfully. Many folks in Barbados don’t worry about the impact of Americans being able to travel to Cuba because they say we don’t benefit from the American market anyway so what’s to lose?

Maybe the answer to “What’s to lose?” appears in the Reuters quotes above: it might be our cruise ship arrivals that suffer when Cuba opens up for vacationing Americans.

It’s not about to happen tomorrow, but when it comes US tourism to Cuba will be huge and it will impact the entire Caribbean region.

What has the Barbados government planned to counter the threat to our tourism? Our guess: nothing.

Over to you DLP government. What concrete steps have you taken with this event in mind?

I heard a little blip on the BBC News last night that mentioned possible changes in US law in 2011 that would open up American tourism to Cuba. A little research online doesn’t reveal any more details about the BBC story, but Cuba says it’s ready to manage a sudden influx of 1 million American tourists if the U.S. Congress lifts its 47-year ban on travel to the Communist island.

As we said in our original article below, we’re happy that Cubans will have a chance to progress, but we’re concerned about what American tourism to Cuba could mean for our tourist industry.

“The threat that Cuba presents to our tourism industry cannot be overstated.”

WASHINGTON — President Barack Obama plans to lift longstanding U.S. restrictions on Cuba, a senior administration official said, allowing Cuban-Americans to visit families there as often as they like and to send them unlimited funds…

Welcome To The Next Cuban Revolution!

Unlimited funds and unlimited travel by Cuban-Americans visiting their families in Cuba.

That is all it will take to start the next Cuban revolution: an economic revolution that will eventually see Cuba developed into the Caribbean’s largest vacation and retirement destination. END_OF_DOCUMENT_TOKEN_TO_BE_REPLACED