Caves Of Barbados: Wonders and Dangers Underground – Expert To Talk About Apartment Collapse Into Cave 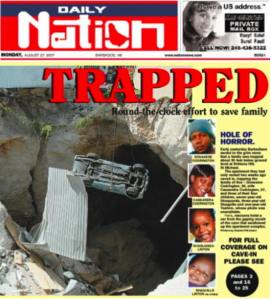 “Straight-talking, outspoken and entertaining” would be an accurate description of Professor Hans G. Machel, so his presentation next Wednesday, January 14, 2009 should be a smasher – especially since his talk will include information about the Codrington family who died when their home fell into a collapsed cave on Sunday, August 26, 2007.

And seeing as how there has never been an inquest into the deaths of a whole family, and there probably never will be an inquest held, Professor Machel’s talk will be the only discussion and presentation to date where the public can hear what an expert has to say about what happened to the Codringtons and whether it could happen again.

CAVES OF BARBADOS AND ELSEWHERE – WONDERS AND DANGERS UNDERGROUND

Caves have given shelter to animals and humans since the earliest times. To this day caves are glorified and mystified, used as homes and temples, burial places and spas, universally popular for exploration, recreation, and movies.

This presentation will explain the origin of caves and related features, such as gullies and sink holes, including the perils of the earth swallowing up people,  cars and houses, such as happened at Brittons Hill in August 2007. This talk will also show various cave formations, including spectacular crystals that are several meters long, and yellow or blue minerals containing sulphur or copper.

HANS G. MACHEL, born and raised in Germany, has been a professor of Earth and Atmospheric Sciences at the University of Alberta in Canada since 1987. His research involves carbonate and evaporite rocks, petroleum geology, and low-temperature geochemistry. A part of his work is on cave systems. He has published more than 100 technical papers on various subjects and received several awards for his scientific work.

Prof. Machel first came to Barbados in 1989 and has visited the island about 25 times since. He has published a book on the geology of Barbados, and has run several field trips for university students and the general public. He is an avid opponent of the Greenland garbage dump site, and has explained its many perils on Barbadian television and radio, in the newspapers and on the Internet.