Do we need armed officers at each Barbados school? Shot fired during school canteen robbery 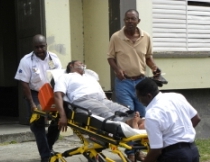 When two thugs burst into the Parkinson School canteen just after lunch on Friday and fired a shot to terrorize the staff, they knew that they could probably get clean away. That’s because criminals, like the rest of us, have noticed that patrolling police officers are a rare sight in Barbados compared with even two or three years ago.

According to the story in The Nation, canteen owner Nancy Lynch was taken to hospital and another woman had a gun placed right against her chest as people screamed and ran from the masked men.

Where our children are.

Where we send them every day to learn and be safe.

“It is frightening to think that in this society we can come to the point where people can think they can come onto a school compound and perform such acts, and in broad daylight,” … school principal Orson Alleyne

The truth is that the thugs don’t think they can rob a school in broad daylight with our children there – they know they can do it because they, like the rest of us, watched the politicians squeeze the budget of our Royal Barbados Police Force for the last 15 years.

Dale Marshall - Policing not a priority

Former Attorney General Dale Marshall told potential Barbados police recruits that they shouldn’t expect to be paid anywhere near what they could earn elsewhere as police officers. That said everything about what Mr. Marshall’s priorities were. (To be fair though, Dale Marshall’s government did give us a hell of a Cricket World Cup party over a few weeks for only a half a billion dollars or thereabouts.)