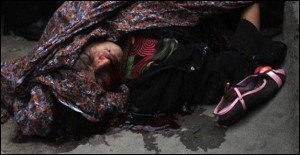 Don’t forget: all cultures are deserving of equal respect because no culture is better than any other…

A pregnant woman was stoned to death by her own family in front of a Pakistani high court for marrying the man she loved.

Nearly 20 members of the woman’s family, including her father and brothers, attacked her and her husband with batons and bricks in broad daylight before a crowd of onlookers in front of the high court of Lahore, police investigator Rana Mujahid said.

The police stood by and watched it happen.

Read the rest of this horrifying story at The Telegraph

And it’s all according to the Holy Koran

In the early hours of May 27, 2014, Meriam Ibrahim gave birth while chained to a wall in a prison in Sudan. The Sudanese court recently confirmed she will be executed now that her child has been born. How civilized of the Muslim court to wait until the child is born.

The 27 year old’s crime was to marry a Christian. She was always raised a Christian, but her father (who left before she was born) was a Muslim. And that makes her a Muslim in the eyes of the court, and apostate. The Koran says apostates should be killed so that’s the end of that.

With Meriam in prison is her 20 month old son.

There is no difference at all between the Islam of Sudan, and Islam elsewhere. The only difference is the percentage of the population that is Muslim. When that percentage reaches a certain level, Sharia Law kicks into play, and Sharia Law is the law.

Let those millions of Muslims come forward who do not believe that Meriam Ibrahim and other ‘apostates’ should be executed for choosing another religion.

Meriam Ibrahim: Apostasy Sudanese woman sentenced to hang ‘may not be freed’, her lawyers warn

The treatment of Ibrahim by the Sudanese authorities was internationally condemned in early May, when the then heavily pregnant woman was sentenced to death for refusing to renounce Christianity, and reportedly imprisoned with her 20-month-old son.

Pressure on Sudan to release Ibrahim increased last week, when the 27-year-old was forced to give birth to her daughter while restrained by shackles.  END_OF_DOCUMENT_TOKEN_TO_BE_REPLACED

It’s the same every Christmas and it’s getting worse with each passing year. With millions of Christians gone from the Middle East and North East Africa, and increased efforts to exterminate Christians in Malaysia and Indonesia, it won’t be long before vast areas are truly ‘Christian Free’.

Gays? Atheists? Critical thinkers? Dead meat, all of them.

Why Barbados is better than Maldives: Reason #257

The Maldives are often compared with Barbados as a vacation and retirement destination. Reading the magazine articles and watching the Travel Channel, you’d think that the Maldives is some sort of paradise for those two staples of the travel industry: “newlyweds and nearly-deads” (Retired people).

If you’re thinking about a vacation or retirement in the Maldives though, you might want to consider that non-Muslim religious books, prayers, videos, photos and other non-Muslim religious items are prohibited. As in all Muslim-majority countries, there is no freedom of religion.

One Catholic teacher just discovered that the moderate tolerant Muslims of the Maldives will report you for having a photo of Mother Mary. Then the police will search your home and drag you away to jail for a couple of weeks. Call it ‘Islam in action’ or ‘Reality under Islam’.

Maldives Vacation Tip: Don’t get caught in your hotel room or on the beach praying to Jesus, Mary, Buddha or Brahman. Things will go very badly for you.

If you want to get married in the Maldives, unless you are a Muslim you could end up in jail. Not to forget that the Maldives Constitution prohibits anyone except Muslims from becoming citizens.

Why would any Christian, Jew, Hindu or Buddhist even consider vacationing, retiring or working in the Maldives? That’s like vacationing in Nazi Germany or Stalin’s Russia.

Come to Barbados where you can swim, surf, party, relax and enjoy life: whatever your religious belief. Whether you pray on Friday, Saturday or Sunday (or any other day for that matter!) you’ll always find a congregation that will welcome you.

And if you want to sit on the beach and pray or read your Bible, Koran, Buddhist chants or any other religious book – feel free to enjoy your time without the worry that you’ll be arrested.

We have freedom of religion in Barbados.

Catholic jailed in the Maldives over a Bible and a rosary

Shijo Kokkattu, a 30-year-old teacher, was betrayed by his colleagues because he accidentally left a picture of Our Lady and some Marian songs on a school computer. Islam is state religion in the Maldives, where there is no freedom of worship. For Sajan K George, president of the Global Council of Indian Christians, religious intolerance and injustice are the “worst form of persecution”.

Mumbai (AsiaNews) – Shijo Kokkattu, an Indian Catholic from Kerala, has been languishing in a Maldives prison for more than a week because he had a Bible and a rosary at his home. Both items are banned on the archipelago. END_OF_DOCUMENT_TOKEN_TO_BE_REPLACED

“There is an absolute and utter failure of the majority of Muslims to this day to condemn continued acts of violence in the name of Allah and to purge their religion of those who foment such violence.”

TEN YEARS after September 11th, if you Google the phrase “What I Learned From 9/11” or some variation (What we learned… What America Learned… What Britain Learned…) you will find in excess of one hundred million returns.

This is just one more such article. You might have your own list, but this one is mine. I’ll try to keep it short…

1/ Pay Attention To Muslim Jihadists And Believe What They Say About Their Intentions and Motivations.

2/ Accept The Fact That Many Muslims Worldwide – Tens or perhaps even Hundreds of Millions – Approve Of Violent Jihad In The Name of Allah even if they do not carry out such acts themselves.

3/ Accept The Fact That Not Everyone Operates By The Same Rules As You Do – And That Some People Conceal Their True Values and Intentions.

4/ If Placed Into A Bad Situation – Act, Resist, Fight With All Your Strength and Will.

5/ Think For Yourself. Act Independently and Disobey Authorities If Necessary.

1/ Pay Attention To Muslim Jihadists And Believe What They Say About Their Intentions and Motivations.

Prior to 9/11, I paid no attention to the Muslim religion except in passing. How could the events of Muslim Jihad and violence in the Middle East, Asia, Europe and America concern a man in Barbados?

So the Muslim Jihadists certainly have my attention now, and when Muslims speak, I listen very carefully.