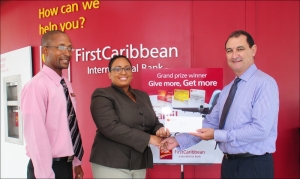 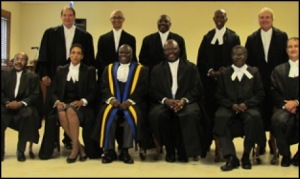 Customer heading off to Miami thanks to CIBC FirstCaribbean

Bridgetown, Barbados, May 15, 2015 – The Barbados grand prize winner in CIBC FirstCaribbean International Bank’s recent “Give More, Get More” promotion is looking forward to enjoying a trip for two to Miami.

Mark Goodridge, 62, was presented with his prize recently at the bank’s Warrens branch. Recalling how he reacted to news of the win, Mr. Goodridge said, “I was very shocked because I never expected to win, to tell you the truth. I did know there was a competition but I didn’t know what the prizes were.”

The long-standing customer said that he finds the bank’s credit card products easy to use. “They are also accepted wherever you go, which is a big plus.”

Mr. Goodridge, an attorney-at-law, isn’t sure when he will take his trip to Miami but said that he and his wife were looking forward to visiting three grandchildren there. Along with the trip for two, Mr. Goodridge also received hotel accommodation and US$500 spending money. He thanked CIBC FirstCaribbean for the “courtesies it had extended over the years.”