These accounts suggest, to the untrained financial eye, that the company is profitable and it is not.”

Excerpt from a reader’s analysis of PwC at Afra Raymond.com

PwC PricewaterhouseCoopers should be ashamed

Two days ago we directed our readers to a new Afra Raymond article about the CL Financial Scandal The CMMB story.

Today one of Afra’s audience left a devastating analysis of the activities of PwC PricewaterhouseCoopers in deliberately misleading investors into CMMB – Caribbean Money Market Brokers. Even though we just covered Afra’s new article, this latest comment says it all and deserves our attention.

People used to trust PwC. What fools we all were.

Without misleading, unethical auditors like PwC – willing to lie, deceive and be well paid for it – Duprey, Parris and David Thompson as their lawyer couldn’t have gotten away with what they did for so long.

Afra’s stories about the rot and fraud at CL Financial, Clico and the other scam companies have been going wild on the hit-meter because so many of us are victims, and will be victimized more as our tax dollars bail out the big guys and put the burden on the little people. The battle cry of crooks like Duprey and Parris: “Privatize profits, socialize losses.”

How could the Barbados National Oil Company lose $65 million?

“The results of the Barbados National Oil Company are out (a year late) and scandalously show that they have lost $48 million in the year, and will presumably have lost another similar amount in the time since March 2009 year end.

I am not an accountant, but there must be some relevance in the fact that the profit from the up-stream side (is that oil production?) is $14.5 million, while the marketing side has lost $65 million.

How can you lose $65 million when the fuel prices are not subsidised by the Government any more?”

According to The Nation, the auditing firm of PricewaterhouseCoopers says that the Barbados National Oil Company is on a downward spiral and will crash and burn without more of your tax dollars. END_OF_DOCUMENT_TOKEN_TO_BE_REPLACED

Friends, some of you agreed with our coverage of the “Dark Days in Barbados“ story in Canada’s Globe and Mail newspaper, and others thought we over-did it. A few readers hit the roof in anger – either at us or the newspaper depending on their feelings. Others thought we should leave Elaine Sibson alone, which is an interesting position considering Ms. Sibson was the one who volunteered to tell her personal story to the world via the Globe and Mail.

For some reason this story generated very high attention with BFP’s readership and internationally. In the last 24 hours over five thousand people read each of our articles on the Globe and Mail story. There were many different opinions and perspectives. (As a side note, after reading the PWC stories, thousands of people stayed and read dozens of other articles here at Barbados Free Press.)

One BFP reader raised a point that we’d never considered and is, upon reflection, something that the Globe and Mail left out. It is a factor that might or might not have had a major influence on Ms. Sibson’s decision to move to Barbados and her subsequent trouble adjusting. We’ll let a BFP reader (and divorced father) say it for himself…

“She had a divorce, was awarded custody of her 12 year old daughter and what did she do? She requested a job thousands of miles away from the girl’s father. That sounds not nice to me and any other divorced father who knows the pain.

Moms who take their children and move away from their children’s fathers create life-long hardship for their children. Granted there are rare exceptions when a move may be warranted. But they far rarer than NOWers (National Organization of Women -ed) admit.

Generally, move-away-moms move primarily for their own best interest and not their children’s…”

Food for thought, for sure.

But okay, it’s time to move on to other stories and we’ll do so now. Although the comments will remain open, this is the last BFP will say about the story. We’ll let the last word in our article be spoken by someone who disagrees with BFP’s coverage.

Your less then stellar story on “Globe and Mail changes misleading website headline – print edition still proclaims “Dark Days in Barbados” has had me irritated all day.

I am a Canadian, presently living in Barbados, and am married to a Bajan, but, it hasn’t always been easy!

You want coverage and only good shining words about Barbados in all papers? Not gine ta happen ya.

I can sympathize with the woman as I to had to deal with the culture shock, it is up to the individual how they deal with it.

I’ve had to deal with the humiliation of being treated less then human by the Barbados immigration dept, in Bridgetown, this goes on daily there.

When coming to Barbados, working in a supervisory capacity, Bajan’s show a whole different side.

(Sent via email to BFP. Name provided to BFP but not published by our editor)

On Monday May 17, 2010 at 7:13am EDT, the Canadian Globe and Mail newspaper online published their article “Dark Days in Barbados“ with the subtitle “Elaine Sibson thought she landed her dream job only to realize it wasn’t the paradise she expected.”

Barbados Free Press found the article, title and sub-title to be highly misleading and an unjustified attack upon Bajans. We said so in our reply article Why a PWC PricewaterhouseCoopers partner quit the Barbados office and went home to Canada.

BFP published our story at 9:29am EDT – a little over two hours after the Globe published online.

In the next few hours many hundreds of Barbados Free Press readers clicked the link in our story and went to read the Globe & Mail’s original article.

Some Bajans and friends of Barbados left comments at the Globe’s story slamming the newspaper for “misleading”. END_OF_DOCUMENT_TOKEN_TO_BE_REPLACED 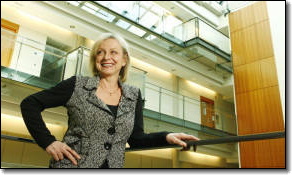 Bad Barbados or a person ill-suited for a foreign posting? We think it’s the later.

Canadian Elaine Sibson came to Barbados in January 2007 to run PWC’s tax practice. She lasted only six months before pulling the ejection seat handles and blasting off the island. Now she’s done an interview with a Canadian newspaper telling what went wrong.

After reading “Dark Days in Barbados” by the Globe Mail newspaper, we at BFP think that the title is very unfair.

“In the office, things were like they were 15 years ago. You tried to change something and they go right back to the way they did it before. I went to a conference in San Francisco on doing business in China, and came back with a lot of printed material. I gave it to a secretary to put it in a binder and it took a day and a half. She punched every page individually.”

1/ Bajans were nice and friendly on the job, but after work Ms. Sibson got lonely.

2/ She couldn’t take the Bajan lack of productivity and unwillingness to accept and implement change. END_OF_DOCUMENT_TOKEN_TO_BE_REPLACED