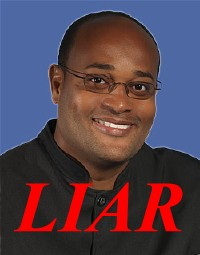 …Patrick Todd, Minister of State in Education and Human Resources Development lies to Barbados and the world.

No, Mr. Todd, DLP Members of Parliament and Ministers in the David Thompson Barbados Government have NOT “declared assets” – as you well know.

You are a damned liar.

As is your Prime Minister and the rest of your DLP crew who promised over a year ago to “declare assets” as a matter of transparency and accountability. And not only did you lie to us about that – it is still legal for government officials like yourself to award juicy government contracts to companies owned or controlled by you or your family members.

Prime Minister Thompson could have changed that with a simple policy order but he has not done so. The reason Thompson won’t change the policy is that the DLP piggies are rolling in the trough and Thompson isn’t going to do anything to make the feast an illegal act.

Well Mr Todd, the Nation News may have a policy of assisting the government to deceive citizens about the total lack of any Integrity, Transparency or Accountability Legislation or policies adopted by the Thompson government, but we at Barbados Free Press assure you that we cannot be bought off by government advertising revenues.

You and your do-nothing “can’t even pass one piece of legislation in a year” government sicken us with your damned lies.

So we’re calling you on this one.