Libya and the addiction of “The World’s Policeman” 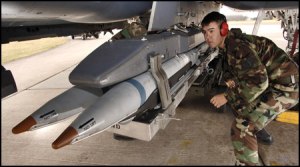 Upon reading today’s news about the continued war in Libya (and yes, Marcus, it is a war) my thoughts again turn to the questions: “What is the compelling national interest that caused the UK and the USA to intervene on one side of the Libyan civil war? And when they did intervene, why did the UK and the USA choose to fight on the side of Al-Qaeda?” END_OF_DOCUMENT_TOKEN_TO_BE_REPLACED

One mocking YouTube video goes viral in the Arab world

Musician Noy Alooshe took a clip of Colonel Qaddafi’s latest rant to hunt down protesters “inch by inch, house by house, home by home, alleyway by alleyway,” – and did a few edits. Then came some tweeking of Qaddafi’s voice and all of a sudden the world has a Qaddafi hit song with a bikini wearing blond dancing along.

Nothing more insulting to Gaddafi – that was until the Libyans discovered the clip is put together by a Jew, and the dancing girl is a Jew too. Now, that’s really mocking and insulting!

All I could think of was Owen Arthur

The ability to mock is probably one of the most powerful tools for political change. That’s why today’s Communists and Islamic Supremacists (and in the past the Nazis and British) and all totalitarian authorities, ruthlessly hunt down drawers of cartoons and singers of songs.

The power of mocking is also why the cartoons and songs keep coming around the world. Here at BFP we may have published a few cartoons ourselves, but oh if we only had the talent to take one of Owen Arthur’s speeches and give it the Zenga Zenga treatment!