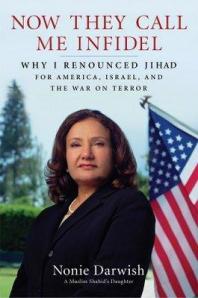 Why Muslims Must Hate Jews

Recently a Pakistani religious leader, Pirzada Muhammad Raza Saqib Mustafai, said: ‘When The Jews Are Wiped Out… The Sun Of Peace Would Begin To Rise On The Entire World’. The same preaching is routinely done not only by clerics but politicians, in Iran, Saudi Arabia, Egypt, etc. This is not just Ahmedinijad, it is at the heart of Islamic theology that world peace will be established only when all the Jews are wiped from the earth. But few people in Western media are alarmed by this kind of rhetoric or care to expose this dreadful dark side of Islam’s obsession with Jew hatred.

I do not believe one has to be an authority on human behavior or group thinking to find out the obvious pathology in Islamic Jew hatred. It is time for all of us to uncover and expose this atrocity against the Jewish people. We owe that to humanity and the truth.

No true Muslim can see that such hatred is unbecoming and unholy for a world religion to focus on and that the credibility of Islam is tarnished by such hatred. No Muslim is allowed to go far enough to self analyze or question why such hatred. Muslims defend Jew hatred by claiming that Jews betrayed Muhammad and thus deserving of this kind of treatment. Even when I was a Muslim, I believed that the one sided story against Jews by Islam, was enough to justify all the killing, terror, lies and propaganda by Islamic leaders against Jews. To the average Muslim, routinely cursing Jews in mosques feels normal and even holy!

After a lot of thinking, analysis, research and writing I discovered that Jew hatred in Islam is an essential foundation to the Islamic belief system that Muslims cannot seem to be able to rid themselves of…