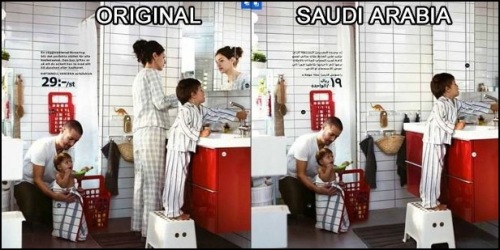 If you really want to know what Islam is all about, don’t bother to read what we or Muslims say about Islam and the Islamic laws called ‘Sharia’. Just have a look for yourself at how Muslim majority societies portray and control women.

Then read the Koran to see where all this oppression comes from, for the Koran is the source of the societal standards we’re talking about.

Make up your own mind as to whether Islam is compatible with a free and democratic society and the values that most Barbadians hold.

STOCKHOLM (AP) — Ikea is being criticized for deleting images of women from the Saudi version of its furniture catalogue, a move the company says it regrets. Comparing the Swedish and Saudi versions of the catalogue, free newspaper Metro on Monday showed that women had been airbrushed out of otherwise identical pictures showcasing the company’s home furnishings…