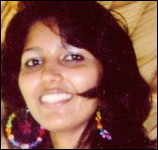 Does nothing work ’bout this place?

submitted by Friend of the Family

Two years ago the Guyana Police Force submitted a crucial piece of evidence to the Barbados Forensic Laboratory: a scrap of cloth found lodged in the running gear of an automobile.

It was thought that this scrap matched the clothing worn by Sheema Mangar (photo above) when she was killed – murdered really – September 11, 2010 during a robbery in Guyana. Sheema was dragged to her horrible death as she was chasing a man who stole her Blackberry phone.

Two years later and the Barbados Forensic Laboratory has not bothered to complete the report on its examination of the scrap of cloth. Two years Sheema’s family has been waiting for justice.

You Bajans talk so big with so much pride about how much more advanced you are than poor Guyana. What use is a forensic laboratory that does nothing?

Friend of the Family

The Home Affairs Ministry wants the Barbados Forensic Laboratory to speedily deliver a second report concerning Sheema Mangar who was killed three years ago when a car dragged her on the road while she was chasing a man who had grabbed her Blackberry.

“Apart from the efforts of the Guyana Police Force, the Ministry is now in touch with the Head of the Laboratory with a request that a report on the second submission be expedited,” the Home Affairs Ministry said in a statement.

This is the third time in as many years that the Home Affairs Ministry and its minister, Clement Rohee have been seeking to assure Mangar’s relatives that everything was being done to acquire all the forensic results from Barbados. END_OF_DOCUMENT_TOKEN_TO_BE_REPLACED