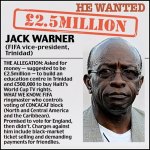 Lots of smoke ’bout this place!

It was only days ago that the story broke of bribery allegations against Jack Warner and three other FIFA officials in relation to England’s failed 2018 World Cup bid.

The following is from the FIFA press release sent out late last night:

“In particular, the report referred to a special meeting of the Caribbean Football Union (CFU), apparently organised jointly by Fifa vice-president Jack A. Warner and Fifa executive committee member Mohamed Bin Hammam, which took place on May 10 and 11 2011.

“This meeting was linked to the upcoming Fifa presidential election.

“In view of the facts alleged in this report, which include bribery allegations, Fifa secretary general Jerome Valcke, in compliance with art. 16 of the Fifa code of ethics, yesterday requested the Fifa ethics committee to open ethics proceedings.”