Che Guevara as the Easter Messiah: His opinion of lowly Negros and Mexicans 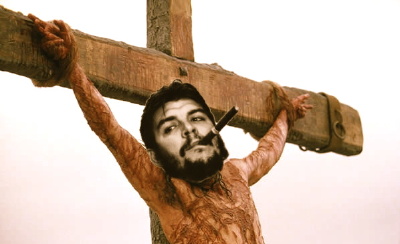 Some might think this article to be a strange way of commemorating Easter, Christ and his sacrifice, but others will I’m sure will appreciate the juxtaposition of Jesus and Che. Hell… the atheists do it all the time, so why can’t this Christian? And yes, this failed Christian has had a rum or four, but why should that stop him from firing up the old Dell and talking about false Messiahs?

As Easter is upon us, we’ve republished a 2007 article We Know What Jesus Didn’t Look Like… Don’t We?

To be “fair” we will now publish quotes from another religious leader: Che Guevara. (“Fairness” is the enemy of “Justice”, but we’ll leave that for another day.)

Seven months pregnant and condemned to death for the crime of being a “counter-revolutionary”? No problem for Che. He pulled the trigger. Even the most barbaric societies allow a condemned pregnant woman to give birth before execution, but not Che.

To this day Communists often punish entire generations for the misdeeds – real or imagined – of one of the family. I’m sure that Che would have simply loved North Korea.

Just so you know my opinion of the icon Che, who also founded the CDR – Committees for the Defense of the Revolution.

Here are a few quotes from Che that for some strange reason don’t appear in the new Apple iPod application of Che quotes.

Just remember folks: don’t believe me, BFP, Reuters, the New York Times or the Barbados Advocate. When you read something, do your own research and seek out original sources of information.

Do that for Che and let me know what you think.

“The Negro is indolent and spends his money on frivolities and booze, whereas the European is forward-looking, organized and intelligent.”

“Mexicans are a rabble of illiterate Indians.”

Happy Easter to our Bajan and Cuban communists.

China’s Solution To Children Killed and Injured By Melamine-Tainted Milk: Arrest Parents Who Talk Too Much 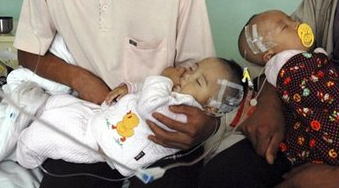 Chinese police detained the father of a child who became ill from tainted milk apparently to prevent him and other parents from holding a news conference to complain that proposed compensation for their sick children is too low, a lawyer said Friday.

Dairies announced details of a compensation plan equivalent to $160 million US this week as at least 17 people went on trial for the contamination that killed at least six children and made nearly 300,000 others sick. The milk contained melamine, an industrial chemical that caused kidney stones in children…

…The news conference, scheduled for Friday in Beijing, was called off after organizer Zhao Lianhai was picked up Thursday, said Li Fangping, a lawyer for some of the parents. He said Zhao was being held at a Beijing hotel. “The purpose was to prevent the parents from holding a news conference,” Li said, adding that 10 parents had planned to participate.

The Communist government, which seeks to control what the public sees and hears, frequently suppresses comments about disasters.

Look On The Bright Side: If China Mistreats Its Own Melamine Victims, The Country Will Have More Money To Give To Barbados!

Barbados and other Caribbean governments have a new best friend in the despots who run the People’s Republic of China. China has been spreading money around Barbados quite liberally: funding and training our police officers (that’s scary!), our military and Coast Guard and contributing to all kinds of building and social projects. China even gave an all-expense paid trip-of-a-lifetime to Barbados journalists and politicians and their spouses where they were shown the sights and honoured by high government officials.

All our politicians and journalists have to do to keep the money and free trips coming is to not mention any of China’s human rights abuses. So… the Barbados news media and successive BLP and DLP governments keep their subservient mouths shut. Can’t be offending the hand that feeds us, you know!

Sure, we know the Chinese government is brutal with their own citizens, persecuting them for wanting religious freedom, freedom of speech or even wanting a child. Sure, we know the Chinese government kidnaps pregnant women off the street, takes them to hospitals and clinics where they are tied down screaming while an abortion is done against their will – but hey, Chinese women don’t own their own bodies, the government does. To hell with mentioning women’s rights in China if it means we can’t get a free vacation next year too!

As a nation built by slaves and their descendants, how can Barbados ignore the plight of millions of slaves kept by China?

And yes, we know that China runs slave labour camps where some three million imprisoned Christians and political dissidents are slave-labour for government factories that produce toys, clothing and machine parts at prices that the West can’t match. If the people were enslaved in Africa, that would be one thing, but these are only Asian people so our government and media leaders say  “What’s the big deal?” 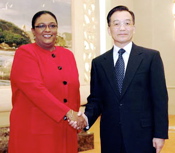 Prime Minister Thompson, Opposition Leader Mia Mottley and the professional Barbados news media all agree on one thing:  ignoring China’s slave camps and human rights abuses is a low price to pay for all that money the China sends Barbados – not to mention those free vacations!

Our thanks to the BFP reader who alerted us to this story. Hey… it must be cold up there in Canada. Come home when you can!

Sept 21, 2007 – Mia Mottley Returns From China With Promises Of Money In Exchange For Continued Silence On Laogai Slave Labour Camps

July 6, 2008 – Did your pet die suddenly from kidney failure? Tainted petfood could be the cause.

“Communists were, and continue to be, motivated to never accept injustice and racism and to act and speak out accordingly…”

Will Somebody Please Buy Norman Faria A History Book?

Norman Faria simply obliterates history in his latest diarrhea published as an editorial in the Nation.

According to Faria, it was those courageous and morally righteous Russian Communists who stood up to those evil Nazi fascists. His article features Alexander “Sasha” Perchersky, a captured Russian political officer who was a Jew and led the famous Sobibor Concentration Camp rebellion. Yes, Perchersky did lead the revolt to escape Sobibor concentration camp, but in Faria’s mind that’s all it takes to say “Communists were, and continue to be, motivated to never accept injustice and racism and to act and speak out accordingly…”

(Interesting statement by Faria, that the Communists “continue to be motivated to never accept injustice…”)

Let’s have a little tour through history and see how Mr. Faria’s warped fairytale stacks up, shall we? 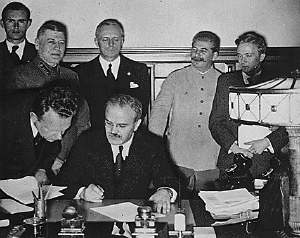 Conveniently forgotten by Faria is the fact that Russian Communists invaded Poland at the same time as Hitler’s troops. You see, just a few weeks earlier in August 1939 the Russians signed this little “non-aggression pact” with Germany that split Poland between the Germany and Russia.

After invading eastern Poland the Russians (who “never accept injustice” according to Faria) murdered tens of thousands of military officers, teachers, priests, rabbis, politicians and Polish cultural leaders. Then they deported a million or two Poles to the Guglag camps as slave labour. This has been the standard Communist operational procedure right from the murder of the Czar and his children, through Lenin, Stalin, Mao and the capture of Hue City where the Communists went door to door with long prepared “please report for a meeting” lists. Those who reported were murdered. 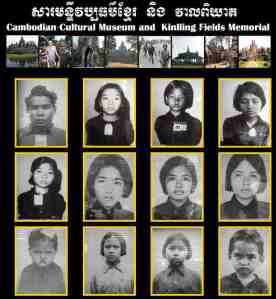 Children Murdered By Communists In The Killing Fields Of Cambodia

Not to mention that stalwart of Communism, Pol Pot, who brought “year zero” to Cambodia. Piles of skulls and photographs of the victims of perfect communism can be found in the killing field museums throughout Cambodia.

And who can forget the religious persecution of Christians, Jews, Muslims and others by the Communists of Russia and around the world? Apparently, Norman Faria can. 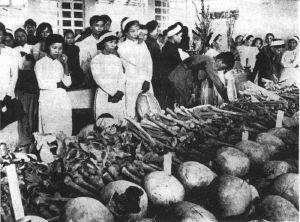 Faria might also want to look up a few words from history as he praises his new Russian communist friends too much more. He should research the words “Katyn Massacre“, “Gulag“ and “Holodomor“. 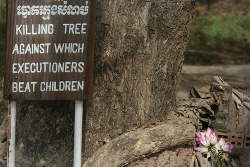 Is Norman Faria On The Russian Payroll… or Only One Who Stalin Called “Useful Idiots” ?

Now before you laugh derisively at that question and ignore it as tabloid hyperbole, please consider the following…

– Russia is entering the Caribbean in a big way as it contests with China for influence and control in the area.

– Russia is arming Venezuela and will base deep-water navy vessels there. The Russian President is currently touring South America and Russian Naval vessels are at this moment entering the Caribbean for a “joint exercise” with Venezuela.

– It is well documented that Russia has, throughout the last 90 years, always maintained networks of sympathizers and agents – especially in geographical areas where it desires more influence. “Friends” within the news media are well paid.

– Consul Norman Faria is an educated man. He is not ignorant of history and certainly not ignorant of the tens of millions murdered by communists throughout their short but bloody history. Yet, he wrote the pure lies that he did.

– An analysis of the Faria article will show that he has used the Rememberance Day event to simply write a positive article about Russians and communitists. In context, the article is strained and strange. It seems apparent that Faria’s main agenda was to write something positive about the Russians during the week that their President is touring the area.

Read some history friends, then tell us what you think about Farea’s claim about Communist morality and why you think that Faria wrote as he did.