We are entering the endgame of the Colman Commission, so we need to maintain full vigilance.  We must bear witness in a sober manner.

“It is noticeable that there has been a remarkable lack of cooperation from others, who were responsible for political decision-taking — to mention a few names: Mr. Enill, Mr. Browne and Mr. Montano in particular — have not offered to come and give evidence,” Sir Anthony said at Winsure Building, Richmond Street, Port-of-Spain.

“It is surprising perhaps that those who were the political representatives of the people of Trinidad and Tobago have not been able to provide assistance to the Commission in circumstances where it might have been expected of them,” he added.

Colman then named three former Cabinet ministers who had been previously named in testimony at the enquiry in relation to the HCU.

“To mention but a few names Mr (Conrad) Enill, Mr (Mariano) Browne and Mr (Danny) Montano in particular have not co-operated to come and give evidence,” Colman said.

That refusal to appear before a Commission of Enquiry amounts to a kind of contempt of court, since it is wilful disrespect for a lawful enquiry.  These are PNM Seniors, whose testimonies would have been invaluable in unraveling this series of financial collapses.

Here is why those missing testimonies are so important – END_OF_DOCUMENT_TOKEN_TO_BE_REPLACED

Afra Raymond on CL Financial Inquiry: “We have a fight on our hands to get at the facts.”

Look at them squirm, my friends. The one thing they don’t want is ordinary folks to have the chronology of the CL Financial fraud simply laid out as Afra did in his PowerPoint Presentation. The lawyers for the Central Bank, Lawrence Duprey, PriceWaterhouseCoopers and Andre Monteil want thousands of papers, annotated with footnotes, references, circles and arrows, indexed, crossed-referenced and filled with phrases like “NOTWITHSTANDING LACK OF NOTICE TO THE PARTIES OF THE PROPOSED BUT UNFULFILLED ACTIONABLE EVENT…”

Yup, big shot lawyers love boxes and boxes of materials that make a simple series of individual frauds look too complex to get a handle on. Anything to obscure facts that show their clients’ intent, involvement, negligence or crimes.

Big shot lawyers hate a simple chronology that shows what their clients did, how they did it, and provides a few choice quotes that show their clients are Guilty as Hell. Lawyers hate the simple, the understandable. 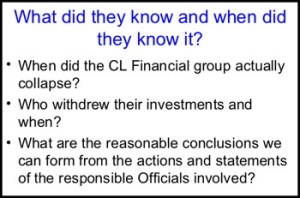 Afra Raymond has his full PowerPoint presentation up at his website AfraRaymond.com, along with some new videos and posts about what’s happening at the Colman Commission into the failure of CL Financial.

No wonder the lawyers aren’t happy about having Afra hanging about the Colman Commission – he makes it all so clear and easy to understand. Swing by Afra’s website for an eyefull, but if you are a CLICO or CL Financial victim make sure you’ve taken your blood pressure meds today. You’re gonna need them.

Comments Off on Afra Raymond on CL Financial Inquiry: “We have a fight on our hands to get at the facts.” 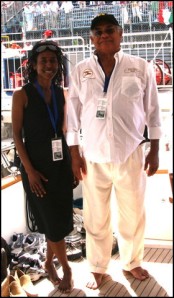 Readers throughout the Caribbean deserve to see these photos and read the story of Lawrence Duprey and friends visiting the 2007 Monaco Grand Prix. After all – our grandchildren will be paying for Mr. Duprey’s crimes until they die. And yes, that is a US$100 “per cigar!” Cohiba in one of the photos. You can bet the wine isn’t from Tesco either.

Enjoy… but first a word about where this material comes from: Monaco Revue and DiversityCanada Foundation.

Although we are using this material under the Fair Use provisions of copyright because we are commenting upon the material and it is also public evidence of the crimes of Mr. Duprey and his gang, and therefore contains an overriding public interest in its publication at BFP, we ask each of our readers to visit Monaco Revue HERE to read the original material.

It looks like DiversityCanada Foundation and Monaco Revue have worthy goals and we encourage each of you to at least visit their websites and give them consideration.

We do note that according to the article, former Trinidad government minister Carlos John (and then “advisor” to Lawrence Duprey) is the “compatriot” of Monaco Revue’s editor.

We also see that what was once an article about the elites having a good time in Monaco is now certain to be of interest to the Colman Commission inquiries into the CL Financial Fraud. Especially as the commission looks into the close relationship between Duprey and Ministers and former Ministers of the Trinidad & Tobago Government. This 2007 article is evidence of crimes and has a compelling public interest. Therefore we have been advised that the Fair Use provisions of copyright are exceptionally strong and allow us to publish the material here at BFP.

We hope that DiverstyCanada Foundation and Monaco Revue have the journalistic integrity to leave this information published at Monaco Revue.

Now on to watching Mr. Duprey and his friends spending your money on a good time… END_OF_DOCUMENT_TOKEN_TO_BE_REPLACED

CL Financial bailout – The Truth about the Truth

Continuing from last week’s critique of the revised bailout and its implications, I have further concerns as to the process by which the legislation was passed.

I am aware that the Members of Parliament were given a briefing on this matter, so that they would be better informed on this complex matter.  That briefing was conducted personally by the Minister of Finance and the Governor of the Central Bank, together with their advisers and certain CLICO officials.

The briefing provided background information on these areas –

I am also told that the Members of Parliament were not given copies of the presentations, which seems to have effectively limited them to gaining certain impressions or the limited notes they would have been able to take during the briefing.

That account of events, given to me by more than one Parliamentarian, seems to suggest that the very rationale of the exercise, said to be the elevation of public rights over private ones, could have been subverted.

The reality is that, despite the extensive debate on the matter, this is the position –

The Parliament benefits from briefings on complex and important matters, but it is unacceptable that those briefings should be somehow shrouded in secrecy.  The Minister of Finance and Governor of the Central Bank need to publish their full Parliamentary briefing, without delay, to remove any lingering doubts.  Good governance, transparency and accountability demand no less. 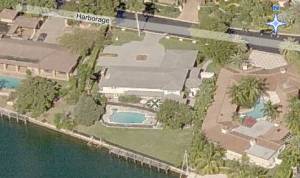 Florida: Just one of the Duprey family mansions