“During the visit, Barbados Environment Minister Dr. Denis Lowe said he was aware of China’s commitment to good environmental governance and its concerns about climate change and other issues which occupied the consciousness of global planners.”

“China warns foreigners to stop monitoring its pollution. The Chinese government claims it’s making serious efforts to clean up pollution. But as this horrifying report shows, much of their ‘success’ has involved simply moving their toxic industries out of sight…

Untreated industrial waste is pumped directly into rivers… the water is used to irrigate crops.”

What exactly does Barbados hope to learn from China about managing the environment?

If you’re going to speak, at least speak the truth – better to just keep silent than to perpetuate a lie. At least that’s what I was always taught.

In recent years China has seen mass riots and violent government responses when the citizen-slaves stand up to stop the ongoing slaughter of humanity caused by their government’s callous and long term disregard for people and the environment.

All those low priced Chinese goods you purchase are low priced for a number of reasons: government & private slave labour camps, sweatshops, rampant pollution and the communist disdain for individual human rights and human life.

Did they care that slaves suffered to provide the products at a certain price?

Every Barbadian should ask their own heart…

“Should we be taking gifts and buying products from a Chinese Communist government that relies upon slavery as a vital part of the economy?”

To the communists, people are always a government resource – never individuals. Where the state is supreme and individuals exist only to serve the state, these kinds of environmental abuses and disasters are at their worst. (See China Hush: Amazing Pictures, Pollution in China)

In the eyes of the Barbados Government, China can do no wrong. Like a dog begging for a cookie, Barbados will do anything and say anything for China – just as long as we know we can pick up some scraps thrown our way. END_OF_DOCUMENT_TOKEN_TO_BE_REPLACED

Babies explain why Chinese-made products are so cheap.

Babies born with Spina bifida, anencephaly and other neural tube defects – for every 1,000 live births…

That’s 18.7 times more neural tube malformed babies born in Shanxi than in the USA. (ie: partial brain, spinal cord on the outside etc.)

I just can’t bring myself to post the photos of the children online. If you must, go to Google and search for photos of “shanxi china pollution birth defects”. It doesn’t much matter whether the “SafeSearch” is on or off: Send the children out of the room first.

Time: How Chinese Babies Pay the Price for Chinese Pollution

What if this happened in Barbados?

One of our long-time readers sent us a link to the Boston Globe article Oil Spill in Dalian, China, and posed the question…

“What if a similar disaster happened at our oil terminal? It could!

What resources would we have? What would be the impact on our main industry, tourism?

We know we need oil. We can talk all we want about alternative energy sources (and we should), but the reality is that Barbados and the world will need oil for a long time to come. We can ease the demand but self sufficiency, if possible, is far in the future and certainly would require different societal values and leadership.

So we must continue to import millions of gallons of petroleum products a year by sea. The Bridgetown fire murders and the Arch Cot cave collapse have exposed the low limits of our ability to respond to localized and relatively simple disasters. (“Simple” meaning in terms of the needed response. The deaths at Arch Cot and Bridgetown were horrific – all the more because they were preventable. What were talking about here is the need for emergency response resources comparing Arch Cot with, for example, 10 miles of west coast beaches smothered in oil while the terminal burns for three weeks. We couldn’t handle it at all.)

In this context, we ask, “What if our oil terminal had a major fire and/or spill?”

China is huge. China can absorb a tragedy like the Dalian fire and oil spill. China can mobilize hundreds of thousands of workers and huge financial resources if it needs to. Barbados? That’s another story.

Please take a moment to read about the China oil terminal fire and spill. Then think about what would happen to Barbados in the same situation – had it been our oil terminal on fire.

Once again folks, we don’t have the answers, but Bajans should be thinking about these issues and planning for the worst.

Unfortunately, as Hurricane Tomas showed us, our government has a track record hoping for the best, rather than planning for the worst.

It’s all about priorities – and consecutive Barbados governments have shown that they would rather fund some dance fete than ensure our fire fighters have the equipment they need to save lives and property.

THAT, my friends, is for truth! 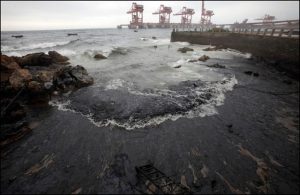 If this was our "Platinum Coast" or Bridgetown? What then?