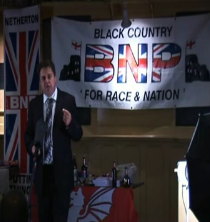 An online article by the racist British National Party has us thinking about some of the comments we’ve heard about immigration from DLP government supporters and Prime Minister Thompson himself.

BFP long ago dropped our sidebar link to Barbados Underground Blog – the de facto active blog of the governing Democratic Labour Party – for a number of reasons including BU’s willingness to publish articles and comments that communicate support for the most foul racist positions.  Some recent immigration discussions at Barbados Underground target West Indians of Indian heritage, whites and asians as being “unacceptable” races for immigration to Barbados. The BU blog publications even go so far as complaining about the high fertility rates of Indians and calling murdered Canadian tourist Terry Schwarzfeld “white trash”.

So it was with a sense of irony that we followed a Google news alert for “Barbados” this morning and learned that none other than Sir Winston Churchill himself is on record in released Cabinet documents as wanting to curtail the immigration of “coloureds” from Barbados to the United Kingdom. Sir Winston was “not in favour” of coloured immigration and wanted to introduce a bill to impose limits based upon skin colour. Viscount Swinton offered that the government could further their position by introducing a committee to look into the “social aspects” of coloured immigration. Other members talked about employment and housing concerns.

The Google news alert led us to the website of the racist and increasingly popular British National Party (Party slogan: “For Race & Nation”). There you’ll find the article What did Churchill really think about Immigration?