Afra Raymond charts the losses from large-scale, improper use of Public Money 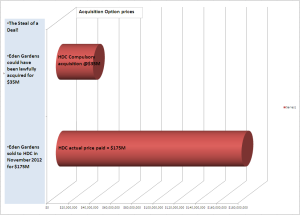 “Eden Gardens could have been lawfully acquired for $35million, but HDC paid $175million for it in November 2012”

“Objectively, it does not matter whether the money is wasted or stolen, if it is ultimately unavailable for the benefit of the Public.”

The last four articles in this series have focused on what I call ‘two sides of the same coin’ – the coin being the large-scale and improper use of Public Money.

I examined the THA/BOLT office project called MILSHIRV being undertaken with the Rahael group and the Calcutta Settlement land scheme in which the HDC acquired developed lands at several times the proper price the State could have paid.

Throughout this type of critique one has to strive for effective balance and fundamental integrity.  The extent of the waste and/or theft is never easy to pinpoint when one is working from outside and relying solely on published documents, but my best efforts to establish those facts is what is presented.  Of course it is impossible to say for sure that any amount of money was stolen in a particular project, hence the phrase ‘wasted or stolen’.

Objectively, it does not matter whether the money is wasted or stolen, if it is ultimately unavailable for the benefit of the Public.  Once spent, that Public Money is gone forever, which is why Value for Money is of such importance in any proper Public Procurement system. END_OF_DOCUMENT_TOKEN_TO_BE_REPLACED