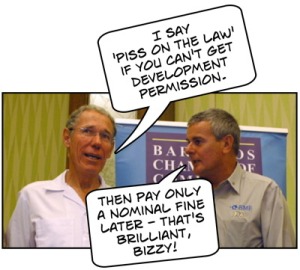 “The Law? Piss on it… Successful developers should buy their way out after breaking the law”

Vaucluse Raceway was built without permission. The developers thumbed their noses at the law and did what they wanted to do. And, because we are a country where all laws are selectively applied and enforced for reasons of money, family, status and connections, the developers got away with it.

And probably there were some “campaign donations” made too.

Vaucluse developers ruined their neighbours’ property values and destroyed the quality of life for hundreds of folks living within the sound of the revving engines and squealing tires. Some folks can’t even get in and out of their gaps on race days.

The Vaucluse developers knew they would have little chance of obtaining permission if they obeyed the law, so they said “Piss on the Law. We’ll handle the law later and Bizzy Williams will give us a hand.”

Vaucluse makes money and Bizzy Williams says that’s all that matters. He says the developers should be fined and then allowed to continue. After all, the place is making lots of money and the developers can afford to pay a fine, so fine them and let them continue, says Bizzy.

The fine is a little concession so ordinary people can’t claim the law wasn’t respected. That is a disgusting manipulation but that’s Barbados.

Bizzy even confessed that he didn’t follow the law when he took Bushy Park track so long ago. So, he says, the same should go for the Vaucluse developers.

Sum up Bizzy’s statements like this: “Piss on the law if it pleases me to do so and I can make money.”

Bizzy and the Vaucluse boys show everybody that certain Bajans can do as they please – so long as Bizzy Williams or some other business or political elite supports the law-breaking.

For ordinary Bajans, there’s nothing new in this story. We’ve heard similar happenings a hundred times. Remember the Turf Club collected $20 million in gate taxes but kept the money. You and I would be in jail for doing the same thing at our little shop.

The government again proved there are two laws in Barbados… One law for THEM, and another law for the rest of us ordinary folk.

Piss on the Law and pay a only small fine when caught, Mr. Williams?

Ok Sir. I’ll follow your example from now on. Thanks.

Please read the article at their website, but as usual we have to print the entire piece here because the Bajan news media often re-writes history. END_OF_DOCUMENT_TOKEN_TO_BE_REPLACED

Why Al Barrack will never win against the Barbados Government: The Fix is In!

“CONTRACTOR AL BARRACK HAS declared war on Government, saying Minister of Finance Chris Sinckler’s unfulfilled promises had convinced him it was not serious about paying him.

An angry Barrack, who was awarded $34 million by the law courts six years ago after suing Government over the completion of the Warrens Office Complex, said yesterday he was tired of being turned around, and would now do whatever it takes to recover every cent he and his creditors are owed – with accrued interests, $75 million.”

Barbados is broke and cannot, will not, pay a court-ordered judgement to building contractor Al Barrack. Mr. Barrack is ruined because there is no real rule of law ‘pon this rock. Successive Barbados governments ignore or obey the courts as convenient and right now it’s not convenient to pay Al Barrack the 70 million dollars as the court ordered.

So Mr. Barrack is in back in the papers saying he has “declared war on the government.” Yes… THAT should teach the Barbados government a lesson! LOL!

The real lesson here is that if you do business with or on Barbados, you’d better pray that everything goes well when it comes time to pay – because the courts don’t matter. It’s all about the cartels. Mr. Barrack thought he was favoured to get a huge government contract without an open bidding process, but it was all a set-up.

Says the Barbados government to Al Barrack… “Thanks, sucker!”

by Nevermind Kurt (with Cliverton)

Poor Al has a message for businesses and foreign investors:

“Oh? You want the money?” said the same court, “That’s a different matter.”

Poor Al is now reduced to writing letters to world leaders. As if they care and as if those leaders would side against an offshore banking centre like Barbados. A big chunk of the world leaders probably have funds flowing through Bridgetown ‘an their own countries don’t know.

You think they are going to side against Barbados, Al? END_OF_DOCUMENT_TOKEN_TO_BE_REPLACED

Try this little experiment on a nice day… drive to the Port St. Charles condo development and park at the north end by the old rotten fishing boats and then walk south on the rocks under the pier to the “exclusive” waterfront club until you find yourself on the PRIVATE beach in front of the condos. Erect a sunshade on the sand, sit down, take out something to eat and put on the radio.

If you can get that done without securty coming to give you a rough time on the “private” beach, you will have done well.

The last time some of our friends did that they were harrassed and photographed by the condo staff. How dare Bajans walk over the boulders that had been strategically placed to prevent people in bare feet from getting to the condo’s beach!

With that in mind, we followed this little exchange on Barbados Free Press with great interest. Does anyone have more to add?

I checked your “break-in news” about the boulders at Almond Beach.

Apparently the operations manager Chris Forbes gave instructions to block the south end so that jet ski operators could not launch their boats there. The excuse he used is that it is a turtle nesting site…but Almond Beach Village use that same area to take tables, chairs and other equipment across the SAME AREA that they refer to as a nesting site…

They even got two NCC rangers to tell the operators not to use that end, but the head of the Watersports Association took them on and they have had to reverse the decision.

Chris Forbes told the watersports head that he could bring the police the NCC or the Prime Minister he was not moving the boulders. But the youngster turn on the heat and he was forced to back off.

Nello Bynoe, who is one of the managers of Almond told a friend that he wanted to “…keep the jet ski fellows from ’bout there”

A few points to ponder here…in Jamaica where Chris Forbes comes from, beaches are private…maybe he should have been told that…

ARE WE TURNING BACK THE CLOCK?

Our friend Don Mitchell has an article up this week about the problems with beach access in Anguilla. Same issues. Of beaches being blocked by hotels and big money, Don says “I feel bad for the children. They will never be able to enjoy what we once had.”

Too true, Don. Too true.