Why no solution on the Graeme Hall Nature Sanctuary?

The last mangrove swamp in Barbados is being deliberately destroyed by the Barbados government – so that private interests (read ‘friends of the ruling party’) can benefit financially by squeezing out the foreign philanthropist / owner and then developing the area into condominiums and industrial parks. This is not an unheard of scenario in Barbados, especially with agricultural lands and natural / scrub / coastal areas. It also is common for landowners to spend decades trying to re-classify agricultural and other natural lands for development, only to be refused time and time again.

Then some person will come along and offer just a little bit over the agricultural value and the discouraged and beaten owner will sell. A few weeks later, the land is approved for development and quickly resold for a hundred times what was paid. That is the real Barbados!

The only problem with the Graeme Hall swamp is that the owner, a Canadian philanthropist named Peter Allard, doesn’t want to develop the area: he wants to preserve this precious natural resource for the Bajan people. Earlier Allard volunteered to have the Graeme Hall Nature Sanctuary incorporated into a National Park. That didn’t work out when the greedy hands of career politicians wanted their cut or NO DEAL! Now that political elite is determined to have it all.

It might take more twenty more years for the cabals to get hold of what is probably the most valuable land on the south coast, but the elites think in generations and they know that there are other foreign chickens to pluck until that time arrives. The elites own the courts and the government, so they have plenty of time.  END_OF_DOCUMENT_TOKEN_TO_BE_REPLACED

Barbados Prime Minister Freundel Stuart just returned from the third Nobel Laureate Symposium on Global Sustainability where he rubbed shoulders with Nobel prize winners and famous and not so famous environmentalists and world leaders.

Not only did PM Stuart attend the conference in Stockholm, Sweden – he played an active role with the UN High-level Panel on Global Sustainability and conducted an open discussion with the crowd. Former US President Bill Clinton listened to our Prime Minister quote Martin Luther King: “There is no deficit in human resources, the deficit is in human will.”

National Geographic quoted Freundel Stuart like he really meant what he said and would back it up with action.

We at Barbados Free Press say…

“Our plea to National Geographic: Come to Barbados and see the destruction for yourself. Examine the reality, then write. Don’t empower those who say fine words but are really selling out our natural environment for money.”

While Freundel Stuart mouthed his fine words, back home his Democratic Labour Party government is conducting a strategic campaign to destroy the last remaining mangrove forest on the island so it can be commercially developed. Money has always trumped the natural environment in Barbados and Stuart’s DLP is continuing the practice. END_OF_DOCUMENT_TOKEN_TO_BE_REPLACED

Winners of Cash Prizes to be Notified in March

Look at the photograph above. My little brother took that photo not so long ago and it say everything about why I cry for Barbados.

The Canada-Barbados essay contest is a way of alerting Bajans to what is really happening. You don’t have time for considering everything about what is happening wid the environment, but it really really matters.

We have to start looking around at our home. We spend so much government money on worthless projects. this is our home. I thank the students who sent essays in to the contest. Win or not, you are the future of Barbados and I thank you and encourage you to keep on caring for our country.

So many student essays have been submitted to the 2011 Canada-Barbados Environmental Youth Awards Programme (CBEYA) Essay Contest, and evaluations by the judges is underway.

The CBEYA and Graeme Hall Nature Sanctuary staff wish to thank the many parents, teachers and students who responded with thoughtful essays that addressed the question:  Why is the environment important to Barbados?

Cash prizes totaling $4,000 will be awarded to winners in each of two levels of competition: Students ages 9-13, and students ages 14-18. There will be first, second and third place prizes awarded in each level, plus Honorable Mention prizes. 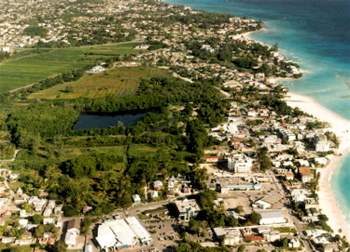 Has a political decision been made to not repair the Graeme Hall wetlands sluice gate?

A reader sends us this quote from a government press conference carried by The Barbados Advocate and some commentary and a question: Has a political decision been made to not repair the Graeme Hall wetlands sluice gate?

“Thirty-six contractors will be awarded contracts before the end of this month for well digging and cleaning throughout the island in an effort to minimise the incidence of flooding.

Speaking to the media yesterday at a review of the wells in the St. Michael West Central area at Belfield, Black Rock, Permanent Secretary in the Ministry of Environment, Water Resources and Drainage, Lionel Weekes, said that the island-wide review, which takes place during the dry season, is done at this time to also ensure that drainage systems are working…”

The recently announced government programme to hire contractors to clean grates, wells and generally maintain the drainage systems is admirable and long overdue. The Thompson government should be congratulated for “pre-emptive” action rather than waiting for the crisis as was the effective policy under the Owen Arthur government.

Sometime ago the Thompson government changed the name of the Ministry to “Ministry of Environment, Water Resources and Drainage” and this indicates the DLP government recognizes how critical the drainage systems are to the overall health and economy of Barbados.

Nonetheless, one vital repair to the drainage infrastructure is missing: the government sluice gate controlling waterflow in and out of the Graeme Hall wetlands has been broken, rusted and blocked by silt for many years. This integral and important part of drainage management on the South Coast has been inoperative for years, apparently because the government is seeking revenge against the owner of a facility within the Graeme Hall watershed. Thus the environmental health of a large area of the South Coast has been put at risk against the public interest.

Will the sluice gate be repaired under the current operation as seems advisable… or, has a political decision been made to continue to not repair the Graeme Hall wetlands sluice gate?

Over to you Denis Lowe, Minster of Environment, Water Resources and Drainage…

Watchers of news media and political elites stunned as one of Barbados’ major newspapers apparently ceases censorship of story.

For years the oldstream Barbados news media has censored and politically-spun stories about the environmental and foreign investment disaster at the Graeme Hall Nature Sanctuary and the Canadian eco-tourism investor who is claiming mistreatment by two successive Barbados governments. This censorship and agenda-driven reporting by the Barbados news media includes…

– completely ignoring major story developments, including the launching of an international treaty complaint.
– re-wording nature sanctuary press releases to remove references to government incompetence or wrongdoing.
– failure to fairly report the central issues being contested between the government and the sanctuary and how these issues impact the Bajan public.
– failure to report the government’s removal of environmental protections for Graeme Hall lands so developers can profit from a national public treasure.
– false reporting designed to conceal the public support for the sanctuary and the proposed Graeme Hall National Park. (For instance, reporting that “hundreds” attended special Graeme Hall Nature Sanctuary free day when TEN THOUSAND supporters attended.)
– re-writing history: falsely reporting that the new shorebird sanctuary project is a “first” for Barbados (Ya. Right) while not mentioning Graeme Hall.
– refusing to confront elected and appointed government officials for their agenda of putting corporate profiteering before the long-term interests of our country.

This news media agenda of deceit in support of the interests of business and political elites was interrupted yesterday when the Barbados Advocate published a fair and accurate report of a press release issued by the Graeme Hall Nature Sanctuary. (Press release and Barbados Advocate story both shown below.)

Frankly, we were surprised and incredibly pleased to see the Barbados Advocate story “Ministry not supportive of Nature Sanctuary”, but we don’t know if this is a major change in policy by the Barbados Advocate – or perhaps the mistake of a junior editor on the weekend who didn’t know the “official” position of silence on this story.

I guess we’ll find out in the coming weeks what happened to cause the Barbados Advocate to print … (gasp!) the truth! We’ll also see if any reporters ask Barbados Environment Minister Lowe about the total disconnect between his version of events and that being claimed by Graeme Hall Nature Sanctuary.

The Government of Barbados has not responded to requests for constructive meetings with the owner of Graeme Hall Nature Sanctuary to discuss the future of Graeme Hall in over a year.

“Except for an introductory meeting in January 2009 with Minister Denis Lowe of the Ministry of Environment, Water Resources and Drainage, nobody from government has called back and agreed to substantive meetings,” said Stuart Heaslet, the owner’s representative for the Sanctuary.  “This is despite our outreach efforts and multiple trips to Barbados .” END_OF_DOCUMENT_TOKEN_TO_BE_REPLACED 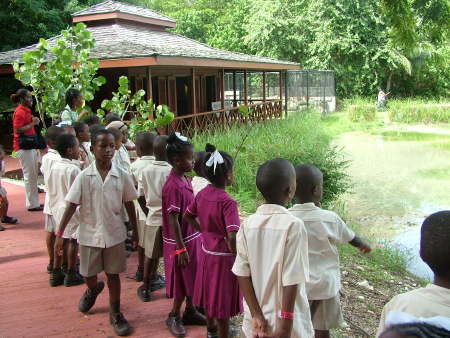 To be awarded four times each year, the CEA Awards encourages and recognises children and children’s groups for their activities that directly preserve and protect terrestrial and marine natural habitats and parklands throughout Barbados for future generations.

“Today’s children are tomorrow’s leaders.  We encourage children to learn the importance of the environment to our health and social welfare, and be proactive in saving wild habitat and open spaces, as well as helping to identify and correct environmental problems,” said Peter Allard, Chairman of the Sanctuary.

“This award pays tribute to the work of many in the community who understand the importance of protecting the last remnants of Barbados’ environmental legacy for future generations.”

Each CEA Award includes a Bds. $2,000 prize, plus a public recognition ceremony at Graeme Hall Nature Sanctuary for invited children, families and guests.

More information for CEA nominations can be found at www.graemehall.com/awards