“CLICO has become the poster child for all that is wrong in Barbados. The people know that elite wrongdoers are well protected – they have the protection of the police and the government.

The stench of corruption and the grandstanding of sanctimonious, arrogant, lawless and contemptuous elite engulf the people. Citizens are arming themselves, shooting at police and committing more grievous crimes. With millions of dollars stolen and no real hope of its recovery, approximately 20,000 seniors are at risk of poverty. And finally, as has been alluded to above, hardly ever are elites incarcerated in BARBADOS.”

All we at BFP can add to that is… Amen, sister! Amen.

Does Leroy Parris of CLICO infamy have anything to do with Welches Insurance Agent Inc. ?

Editor’s note: Remember folks… this is an anonymous blog so don’t take anything for true without a little salt and lots of questions. We received this anonymously and have no way to check the information.

If it is true, it is news. If it’s not true, it was sent by some anonymous mischief troublemaker…

I would like for somebody to tell me how it is that Faye Wharton-Parris wife of CLICO Ex boss Leroy Parris has so boldly displayed on the door next to her business Premier Event Services Inc @ Welches Plaza a sign with the name Welches Insurance.

Are people so blind or is it that they don’t know of this newly formed insurance Company? I know for a fact that it is belongs to them. The PARRISES making jokes at us and turning some Bajans into parros because they can’t get their investments back.

“We have now been bound into a long-term arrangement to restore the fortunes of one of the Caribbean’s riskiest adventurers.”

“…it seems clear that the cupboard is bare and that this CL Financial group has no unpledged assets of any value.”

“We are… advancing an unlimited quantum of taxpayers’ funds, for which no security has been provided and those funds are being advanced at ZERO interest.”

“…the State (takes) all the risk, a massive injection of capital, responsibility for management, yet even in the case of a successful outcome there is no return either by way of interest on the funds advanced or equity in the rejuvenated enterprises.”

“..where is the $5.0Bn missing from the CLICO Statutory Fund?”

These are some excerpts taken from Afra Raymond’s latest article on the CL Financial – CLICO bailout. Afra used a Freedom of Information demand to obtain the June 12, 2009 CL Financial shareholders’ agreement with the Trinidad & Tobago government – and what a scam that agreement is.

Afra explains how we taxpayers are being raped to save the skins of a few big shot friends of government – and it’s not just the Trinis.

With the full and enthusiastic participation of their David Thompson DLP government, Barbados citizens are also being raped as our Prime Minister uses our money to bail out the Godfather of his children, long-time legal client and political supporter, Leroy Parris.

Barbadians of all ages, colours and political stripes should read Afra Raymond’s articles – but they should also think for themselves as they read the original documents that are posted on Afra’s website.

Florida: Just one of the Duprey family mansions

Taxpayers take all risks while the Bigshots keep their Mansions

My friends, you don’t have to listen to what Afra says. You don’t have to listen to what Barbados Free Press says. You can think for yourself so read the original documents and make your own list of questions and demands of the elected politicians who have pledged the wealth of your nation and your future in a bailout that lets Parris and the Dupreys and the rest of them keep their mansions and offshore bank accounts. 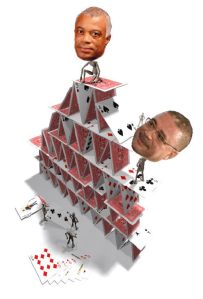 Then ask Barbados Prime Minister David Thompson to show all the CLICO – CL Financial bailout documents and business records that remain hidden from the taxpayers because Barbados does not have a Freedom of Information law.

Here is Afra’s latest article published in full. You really should visit his website and read it there, but we’ll leave it up here in full because… ya never know!

Read this article at: www.afraraymond.com

FOR YOUR INFORMATION: A copy of the official agreement between C.L. Financial Limited and the Government of Trinidad and Tobago (PDF) has finally been delivered to me per my request under the Freedom of Information Act.  The CL Financial Shareholders’ Agreement (SA) of 12th June 2009, which I requested on 16th November 2009 under the Freedom of Information Act, was sent to me by the Ministry of Finance on 11th March 2010.  My emailed response to the Minister of Finance is on the home page of this blog.

My preliminary comments are –

Quantum – The shareholders’ agreement (SA) is silent as to quantum, which would seem to mean that the group will enjoy unlimited access to taxpayers’ funds.  The 2010 budget statement on 7th September states an estimated allocation to the CL Financial bailout of $5.4Bn – but subsequent events have only added to the confusion.  To wit, the $50M USD for the British-American Insurance recovery (as per 2nd November ECCU press release) and the ‘up to $510M’ announced to be available to meet the pensions due to ex-Caroni workers.  Question being whether the $5.4Bn includes the subsequently-announced amounts or are those to be added-on?

Security – At the preamble to the SA – on page 5 – we are told that “…valuable consideration…” is being offered by CLF as per the original MoU.  Of course, given the Governor’s revelations on 7th April 2009 – see http://guardian.co.tt/business/business/2009/04/08/govt-left-empty-handed-cl-financial-bailout – that is simply not so.  Indeed, it seems clear that the cupboard is bare and that this CLF group has no unpledged assets of any value.

Interest – No mention of interest at all.  We are therefore now advancing an unlimited quantum of taxpayers’ funds, for which no security has been provided and those funds are being advanced at ZERO interest.  Given the well-established rule that late payment of taxes makes a taxpayer liable to 20% interest and the interest rate the Federal government charged AIG for their bailout funds – it was 8.5% above the benchmark LIBOR, which was at 3.0% – it is clear that this represents a massive concession to the CL Financial group.  Quite apart from the bailout itself, the 325 shareholders of this group are also benefiting from this unprecedented and unexplained facility of ZERO percent interest rate.

Accounting – Section 4 of the SA sets out the procedure for a proper system of accounts, culminating at 4.4.5 – “…shall ensure that an annual report of CLF is prepared and dispatched…in manner consistent with standard corporate practice…“.  The accepted interpretation of this language informs us that the word ’shall’ denotes an obligatory, non-voluntary duty.  If that is the case, when can we expect publication of the 2008 annual report, accompanied by audited accounts, as per ’standard corporate practice’?

The role of the Shareholders – The MoU of 30th January, at Para (c) of its preamble, spells out its aims as “…to protect the interests of depositors, policyholders and creditors of these institutions…“.  According to the second sentence of the Ministry of Finance press release of 12th June 2009 – this is the penultimate document in the ‘Quick-Guide’ in the CL Financial bailout section of this website – “This new agreement is designed to give substance to the Memorandum of Understanding (MOU) of January 30th 2009.”  The SA of 12th June 2009 was the subject of that press release.  The SA, at Para A. of its preamble, states the intentions of the parties as having been set out in the MoU of 30th January 2009 and ends by “…their stated understanding, inter alia, that certain steps be taken to correct the financial condition of CLICO, CIB and BA in order to protect the interest of depositors, policy holders, creditors and shareholders of these institutions…” (These two words are put in bold as my own emphasis).

I questioned that official version in ‘Fit and proper?’, ‘Party of parties’ and ‘Figuring it out’ – all available on this blog.  Now that we have the actual SA to work with, it is clear that the statement in 12th June press release is extremely misleading.  The SA does not just ‘…give substance to…‘ the original MoU, it in fact is an entirely different species of agreement.  The Shareholders’ Agreement constitutes a written guarantee to protect the 325 shareholders of this CLF group.

Assisting the incoming Management – Clauses 2.3.3 and 2.3.4. of the SA, require the outgoing CL Financial chiefs to render all assistance to the incoming Board and Management in terms of all records and accounts etc.  The question here is ‘Have the new Board and management been receiving the full assistance of the previous CLF chiefs?’  If not, what is being done about it?  If yes, where is the $5.0Bn missing from the CLICO Statutory Fund?

END_OF_DOCUMENT_TOKEN_TO_BE_REPLACED

“Given accounting conventions as to intervening events and their reporting, it is startling, to say the least, that this balance sheet should have declined to $24Bn just 12 months and 13 days after their reporting date. Only 56 days after publication.  This is an aspect of the fiasco which has not been discussed in public, so far.

We need to hear some accounting of this extraordinary situation.  Just to select one item of interest, Loans and Advances are shown as $21.975Bn in the CLF 2007 accounts and yet only $8.0Bn is there at 13th January 2009.

Conflicts of Interest and Sinister Secrecy Continue in CLICO Scandal

This article was originally published by us on September 22, 2009. In light of Afra Raymond’s excellent article published by BFP on March 1, 2010 CL Financial & CLICO Bailout – The Mystery of the Missing Billions we thought our readers might want to give further consideration to the conflicts of interest by Barbados Prime Minister Thompson in relation to the CLICO scandal and bailout. We’ll repost this article at the top of the blog for a day or two.

The Prime Minister of Barbados has a long-standing conflict of interest between his duty to the public and his close friendship with CLICO Barbados executive Leroy Parris. Mr. Thompson has addressed the conflict essentially by saying that Parris is his longtime friend and anyone who has a problem with that can pound salt. In other words, the public can “piss off”.

Sorry about the language friends, but I wanted you to be clear on the Prime Minister’s simple message when the fancy words are stripped away. Make no mistake, Barbados citizens have been told to “piss off” when it comes to mentioning David Thompson’s conflict of interest.

Now some insurance industry executives are finally speaking out. (source article at end of page)

If the conflict was only friendship, it would be bad enough – but it is much worse than that…

Thompson used to be CLICO’s lawyer – at a time when the company illegally failed to file financial statements!

END_OF_DOCUMENT_TOKEN_TO_BE_REPLACED

This article has spiked in the last day as hundreds of searchers are being directed to Barbados Free Press through a Google search for “Ramchand RAMNARINE“.

Mr. Ramnarine is one of the Directors of the Florida company “B. A. Management Services, Inc.” that is associated with the fraudulent Florida land deal described in this article.

We can find no recent news stories online that would explain the sudden interest in Mr. Ramnarine, but several hundred people apparently experienced the urge to Google his name in the last 24 hours.

Can any of our readers tell us why Mr. Ramnarine is generating such interest?

Court documents sent to Barbados Free Press reveal that a CL Financial Group company involved in a US$300 million dollar Florida land deal – paid more than market value for the land. This happened because the seller of the land provided “incentives” (read “secret commissions”, “bribes” or “gifts”) to company insiders in return for having CL Financial Group purchase the land for more than it was worth. END_OF_DOCUMENT_TOKEN_TO_BE_REPLACED