The name Wang Jianlin may not resonate with you, but according to the South China Morning Post he is the richest man in China and recently announced plans to build the world’s biggest tourism enterprise which will overtake the current giant, Disney.

The chairman of the Wanda Group stated that his holding company will achieve an annual revenue of 100 billion Yuan (one Yuan currently equals .16 US Cents), attain annual net profits of US$10 billion and handle 200 million visitors by as early as 2020.

At this stage he has not ruled out entry into the aviation segment after China lifted a five year restrictions on applications for new airlines in 2013 ‘spawning a wave of privately owned start-up carriers’.

To even try and understand the exponential growth, Wanda’s in house travel agency revenue is expected to reach 10 billion Yuan this year, 20 billion by 2017 and 40 billion by 2020.

Last month Wang together with Tencent Holdings and Citic Capital led a US$967 million acquisition of ticketing website, Ly.com, which is currently the country’s third largest online travel site in terms of revenue generated.

That sound you hear at Chinese embassies throughout the Caribbean is the shuffling of journalists, government officials and other folks crawling on their knees to get their share of the free trips, goods, money and other largesse dispensed by the Chinese government because… because of their good and kind intentions.

The only condition (and it’s not even necessary to agree in writing) is that the receiving governments, people and organisations don’t mention the sins of China or the Chinese Communist Party, including running the world’s largest slave camp system, systemic poisoning of the environment and the routine trampling of human rights, freedom of religion etc.. Also on the ‘don’t mention’ list are forced abortions and executions for property crimes to facilitate government selling of prisoners’ organs. And China certainly doesn’t want to hear any talk of the Tienanmen Square Massacre or how journalists are beaten to death for reporting illegal disposal of cadmium waste. Same same for the concerns over the Confucius Institute programme at UWI.

So pay no attention to these fanciful stories of Chinese slave camps, forced abortions and repression of Christian. Just line up for the free money!

What would Sarah Ann Gill think about our silence over religious persecution in China?

On this day of emancipation, we pray for millions still held as slaves in China, North Korea, Africa and throughout the Muslim world

China Olympics – Police Ask Bar Owners Not To Serve Blacks Because They Are Pimps, Prostitutes And Drug Dealers

BFP Apr 28, 2008 – Help Us Confirm The Names Of The Barbados Journalists Who Took Gifts From Communist China

Some 19 persons will be heading to the People’s Republic of China later this month to attend a number of bilateral seminars on Agro-processing and Agriculture.

The group is scheduled to leave the island next Wednesday, June 10, 2015 for the seminars, which will run from Friday, June 12, to Thursday, July 2, on Hainan Island, China. The delegation will be led by Senior Agricultural Officer, Leslie Brereton, and will include representatives from the Barbados Investment Development Corporation (BIDC), the Barbados Agricultural Development and Marketing Corporation (BADMC), and a number of private persons involved in agriculture.

The bilateral seminars are fully funded by the People’s Republic of China and are organised through the Academy for International Business Officials (AIBO), also known as the Training Centre of the Ministry of Commerce. The seminars are expected to include presentations, lectures and tours. (KRM/BGIS)

This article is about the Las Alturas Enquiry into the collapse of two new Morvant apartment buildings erected by China Jiangsu International Corporation (CJIC) for the Housing Development Corporation (HDC).

This Enquiry seems a politically-motivated one into a serious failure of professional practice which could have cost human lives. It is only in its opening stages, but it is already clear to me that this episode is one which contains serious lessons for our country in terms of the role of Enquiries; the role of the Chinese contractors; the culture of non-enforcement which we practice and of course, the impact of targets and political objectives on proper process.

In the case of Las Alturas this is a large-scale multiple-housing project constructed on a former quarry-site on the Lady Young Road, just south of the lookout. Two apartment buildings which were completed in late 2010 were eventually declared uninhabitable due to severe cracking and the proposed demolition of those structures was announced at the end of May 2012. Each building comprised 24 three-bedroom/two-bathroom apartments, with the total cost of those buildings stated by HDC to be in the $29M range. The buildings were erected by CJIC on the design/build basis which usually places all responsibility for soil investigation, design and construction onto the contractor…

Barbados welcomes Chinese money with no cultural or sovereignty concerns

Governor General Sir Elliott Belgrave, China’s Ambassador to Barbados… and a glass of the good stuff!

Have you noticed how the pro-Bajan culture supporters go silent when China arrives?

“Next year, Ambassador Ke noted, through the diligent efforts made by the two sides, some of the major projects supported by Chinese grants or loans will begin to take shape.”

The same folks in government, politics and finance who warned against British colonisation and American hegemony seem to have no problem with Chinese money pushing Chinese culture and the Communist version of history in Barbados.

Barbados’ Minister of Education Ronald Jones gushed with fawning excitement at the unveiling of a plaque to announce that the Communist Party of China will now be teaching our young people their version of China’s history, foreign affairs and human rights. Press release here

China’s Ambassador to Barbados, Wang Ke, was smiling too because he knows that the Chinese Communist Party’s access to our Bajan youth will be on an exclusive basis – with no opposition or human rights groups allowed to spoil the party at the new Confucius Institute to be established at UWI’s Cave Hill Campus.

Teaching adherence to the Chinese Communist party line is a basic requirement by the ChiComs if Barbados is to receive the construction funds and ongoing operational costs from China.

China has built hundreds of these institutions all over the world, that according to various news stories, act as propaganda and espionage centres for the communists.

Just take that money and run!

Because… when you’re broke and begging you have no independence left at all.

from Wikipedia Criticisms of Confucius Institutes

“The Confucius Institute (CI) program, which began establishing centers for Chinese language instruction in 2004, has been the subject of criticisms, concerns, and controversies during its international expansion.

Many such concerns stem from the CI’s relationship to Chinese Communist Party authorities, giving rise to criticisms about undermining academic freedom at host universities, engaging in industrial and military espionage, surveillance of Chinese students abroad, and attempts to advance the single-party state Chinese government’s political agendas on controversial issues such as Tibet and Taiwan. Additional concerns have arisen over the institutes’ financial and academic viability, teaching quality, and relations with Chinese partner universities.

Confucius Institutes have defended their establishments, comparing them with other cultural promotion organizations such as Alliance française and Goethe-Institut. However, unlike the Alliance francaise or Goethe-Institut, Confucius Institutes are managed by the Chinese government and operate directly on university campuses, thus giving rise to unique concerns related to academic freedom and political influence. Some observers have noted that CIs are largely limited to teaching cultural and language programs, and the institutes’ staff tend to self-censor with regards to political and controversial subjects as human rights and democracy.” 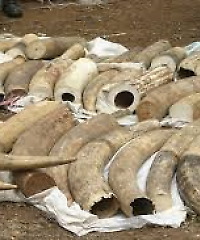 “Chinese traffickers are present in every range state and operate at nearly every point along the ivory supply chain.”

“Many conservationists believe that there is covert approval from the top levels of the Chinese administration, that ivory processing and possession is their cultural right, a right which cost tens of thousands of elephant their lives in recent years.”

Remind me… What was that verse about the ‘love of money’ ?

We Bajans are so selective in our outrage. Worse than Americans really – for if the Americans ban products from Cuba while still doing business with China, the largest single human rights violator in the world, at least the US Government criticizes China’s government for slave camps and other violations of human rights, even as the US continues to do business.

How can it be that Barbados – a country founded upon slavery, whips, rape, kidnapping and all manner of human misery – remains silent about China, a country that still maintains the largest slave camp system in the world? How can our government say nothing about the Chinese government kidnapping pregnant women and forcing abortions as government officials hold down screaming mothers? How can we say nothing about China destroying hundreds of Christian churches and imprisoning millions because of their religious beliefs?

The answer is this: The Chinese government purchases Bajan silence in exchange for gifts of cash, travel and material goods. It is in the economic interests of our Government and of certain businesses and individual Bajans to forget about China’s slave camps, religious persecution, forced abortion and infanticide.

And so we remain silent, and even embrace Barbados China friendship.