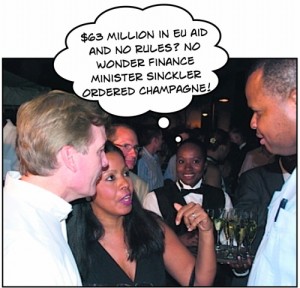 Sugar is over, finished…

With the recent revelation that the Government-owned Barbados Agricultural Management Company left 1000 acres of cane to rot in the fields – and that our country’s total 2015 sugar harvest might not reach even 10,000 tonnes, BFP re-blogs this post.

It’s time to leave sugar behind. It is a deep, dark hole that sucks money and energy from this nation. None of our children will cut cane or pick cotton, and the cost of Barbados sugar production is the highest in the world.

It’s over folks. It’s over.

Remind me… what was the Barbados government plan to replace the sugar revenues?

Oh ya… I remember now…

1/ Beg the Europeans for money – playing upon white man’s guilt.

2/ Sell the rest of the island to foreigners.

“Instead of pouring more money into sugar, the Government of Barbados would be better served letting the industry die a peaceful death, as St. Kitts did in 2005.”

“This massive investment in the sugar industry defies logic and sours an otherwise prudent budget.”

“Sugar is so intrinsic to their national identity, however, that Barbadian taxpayers apparently support this fiscal profligacy.”

We’re looking at many of them in our article WikiLeaks: Massive release of Barbados US Embassy documents. You can help too by going to WikiLeaks Embassy Bridgetownpage and digging in!

But we’re going to post this cable on its own because it makes for very interesting reading.