Do Islamic State jihadists have any dodgy Vincentian passports? 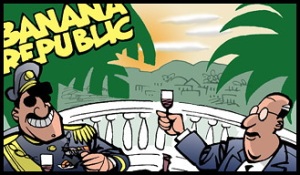 Did they find everyone who had been issued a dodgy Vincentian passport that allowed them to change their name without declaring their previous name? Did they get back every dodgy passport issued?

We don’t know, and may never know exactly what went on with our passports.

The batch of unissued dodgy passports were said to have been burnt and destroyed, once they were destroyed it became impossible to audit the numbers burnt against the number acquired by the government, were any missing and how many were actually claimed to be officially issued? Were any unofficially issued? With the passports burnt we will never know. The evidence has been destroyed.

There are lots of Cubans here in SVG, about 300 immigrants who have residency and work permits, who are able to work and have jobs that Vincentians should have, and they are not part of the 300 working at the Argyle Airport. Some Cubans have been given honoree citizenship, why? You must ask PM Gonsalves that question, also ask him if any of them were issued with those dodgy passports that allowed them to enter the US and Canada as Vincentian citizens with no reference to their previous citizenship and birthplace in Cuba? Is that possible? Is that a true case scenario? We have seen Iranians who are said to have Vincentian citizenship, were any Iranians issued with those same dodgy passports?   If any of that went on, how do we know that passports have not been issued to members of ISIS, allowing them to enter the US and Canada undetected.

“The burning of those passports was little less than a criminal act;

it’s no wonder that Canada withdrew the right for Vincentians to enter Canada without a Visa.”

Now it has been announced that the Europeans are about to sign an agreement with some Caribbean countries, that includes SVG. The agreement is called the ‘Schengen Visa Waiver Agreement’ it allows our nationals to enter and travel freely through European Union States. Has anyone told the Europeans about the dodgy passport past and how we are now required to have a Visa to enter Canada? Has anyone told the Europeans that our women are so badly beaten and ritually raped, that when they get to Europe many will be claiming asylum? In 2010, our women ranked 8th in the world for refugee claims to Canada. Has anyone told the EU that the US identified an Iranian special agent as a Vincentian duel citizen? An Iranian who has been laundering billions of dollars for the Iranian government, in doing so circumventing the US sanctions. Because by not telling the Europeans it’s like withholding evidence, it’s like telling the worst possible lie. You can be sure it will come back and bite us in the bum. I am therefore honor bound to send a copy of this letter to the EU tonight.

Gonsalves, whose office has direct responsibility for the issuance of citizenships to non-nationals, maintained, “I have a fundamental, philosophical objection to economic citizenship.” “I maintain that the highest office in the land is that of citizen. “

So what is the difference between economic citizenship for money and economic citizenship for favor? Why have Cubans been allowed to gain citizenship in Saint Vincent and the Grenadines? Does that have anything to do with packing constituencies with Ralph voting Cubans, and pretty little Cuban girls requiring a favor? How many Cubans are living in the Kingstown constituencies? Stoney Ground area and French’s and Arnos Vale? From what I have seen and heard they have become a powerful ULP lobby group in those areas. Let’s hope that the NDP are keeping an eye on Spanish names on the voter’s lists, unless they have changed their names from Marrón to Browne, Gonzales to Gonsalves or some other Vincentian names.

My mind then went back to Wikileaks and several references to passports;

¶5. (C) While in Southeast Asia, PM Gonsalves named Datuk Vinod Sekhar as St. Vincent’s Honorary Consul for both Malaysia and Singapore, according to the GOSV press release. The GOSV failed, however, to explain whether Sekhar would find time from his busy corporate and philanthropic schedule to provide consular services to Vincentians travelling in Southeast Asia. If PM Gonsalves follows tradition, Sekhar’s Honorary Consul status came with the issuance of an actual St. Vincent diplomatic passport. The provision of diplomatic passports to non-citizens is a common practice of Caribbean leaders who, critics complain, grant both honorary and even formal diplomatic status to individuals as a means to repay wealthy benefactors (refs A and B).

¶6. (C) Comment: PM Gonsalves’s conferring Honorary Consul status on Sekhar suggests that either this prominent Malaysian businessman, his company, or its foundation paid for the PM and his family to take their Southeast Asian junket. This is not the first, nor will it be the last, such trip for Gonsalves, who has an extraordinary travel schedule for the leader of a small, cash-strapped Caribbean country. The GOSV certainly cannot afford to foot the PM’s bills, which are probably being paid by Sekhar and others like him. The question is what do they get for this? Major foreign investment in St. Vincent is limited mainly to the tourism sector, which is the nation’s only growth industry. It remains to be seen how the Petra Group or the Governments of Malaysia and Singapore could become involved in tiny St. Vincent.

¶10. (C) Comment: The increasing availability of campaign funds to Caribbean political leaders, combined with a lack of legal control over how the money is raised, makes for a troubling situation in a region where many turn a blind eye to corruption. A few hundred thousand dollars, a pittance to a wealthy businessperson in Barbados or the Cayman Islands, could buy a great deal of influence in one of the small, economically troubled countries in the region. Some of this influence may be purchased to further legitimate business concerns, but as in the case of marijuana growers, or even the bearers of passports to which they are not entitled, the influence could be used for more nefarious purposes. End comment.

But back to ISIS, with our dodgy Venezuelan friends, who are likely to get into bed with anyone – certainly North Korea, Iran, and all sorts of terrorist and rebel groups in South America and Africa. With the immense wealth that ISIS have now they are able to buy almost anyone they wish. They can even buy whole countries. ISIS would have no problem buying their way into Venezuela and coming down the islands smuggling plastic bags of soap powder. Remember when a bag of cocaine mysteriously turned into a bag of washing powder? Absolute magic! Then a great shoot out took place with the same Venezuelans. People were killed and the Venezuelan’s were eventually sent back to Venezuela with an heroic award each, the ‘Vincentian Hammer and Sickle’, a badge of honor, solidarity, and immunity from our laws.

Why do I keep referring to the Venezuelans? I do that because I am trying to demonstrate just what scum they are and their capabilities of shipping a few ISIS members through our little islands, I would put nothing past them.  http://www.borderlandbeat.com/2014/09/former-state-department-officialterror.html    http://rt.com/usa/240285-general-isis-america-caribbean/

We need to be aware of what is going on since we became members of ALBA and started calling our traditional friends and allies nasty names of ridicule and hatred.

We need to rid ourselves of the Venezuelans and bring the Cubans under proper control and remove all authority from them in SVG. Unless we can do that we will eventually end up with no traditional friends, the real friends that do not want to take over our airport and seaways, and ultimately our minds.

We want to rid ourselves of such a country as Venezuela that is so obviously now involved in the international cocaine business. http://www.insightcrime.org/venezuela-organized-crime-news/cartel-de-los-soles

We need to rid ourselves of Vincentian politicians whose sole aim in life is to paint everything red.

We need to get back to a land of decency and back to loving each other, mending the divides between our people that this Unity Marxist ULP party has created.

It’s time to shut the door on all the scum, homegrown and foreign, and that most certainly includes ISIS.

Remember ISIS hijacked our government website recently and left a message on it. So we know we are on their radar, in the sights of their sniper scopes. And if anyone has got a little bundle of dodgy passports in their desk, they will be wanting a few and are able to pay any price asked.

Filed under Corruption, St. Vincent and the Grenadines

One response to “Do Islamic State jihadists have any dodgy Vincentian passports?”