How Bridgetown built the economic foundation of the British Empire – only to be discarded when the profits were gone. 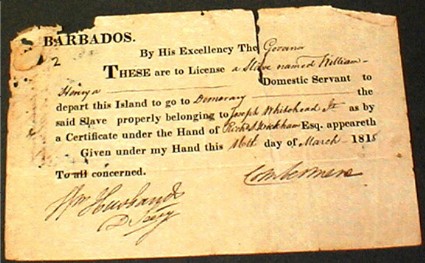 Slavery Reparations have never interested me because I know that whatever we receive will never be enough for the victims class, and that anything we do receive will be stolen by the political class. No reparations will ever touch my hand. No amount of reparations will provide a steady flow of clean water from my pipes or establish a modern sustainable economy.

Britain could pay us 10 billion pounds and not one new hospital bed or surgery will appear at that slum we call the Queen Elizabeth Hospital – or anywhere else. A trillion pounds will not erase the arrogance of government employees towards citizens, nor will it cure the ‘Island Time’ syndrome that makes foreign business investors run like mad from the Caribbean once they get over the rum, sun and sand.

Barbados is incapable of receiving and delivering reparations honestly and effectively for the general good.

Whose fault is that? I’m not sure, but I do know that at one time Barbados was the driving economic force and secure military base that built and maintained the British Empire.

Whatever Tristram Hunt has written in his new book Ten Cities that Made an Empire, he’s probably 50% correct and 50% nonsense. After all this time, who can say?

But I look forward to the read.

Ten Cities that Made an Empire by Tristram Hunt, review: ‘enthralling and compelling’

A fascinating account of 10 cities that were shaped by, and helped shape, British rule

Bridgetown, Barbados has always held a particular appeal for the British. The legacy of empire is all too apparent, and is, indeed, exploited for tourists. The series of historical attractions based on Plantation House present, as Tristram Hunt writes, “a sepia version of the colonial past”. Nostalgia for cricket, rum cocktails and the old plantation lifestyle trumps the blood-drenched history of slavery on the island. Bridgetown is a modern city, but the colonial memory continues to reverberate.

Other cities that came of age under imperial rule are not so burdened by nostalgia for their past. In Mumbai, many of the buildings of the Raj have been unsentimentally demolished to make way for skyscrapers; statues of the heroes of the British Empire – some of them decapitated – have long since been confined to the gardens of a museum. Hong Kong is famous for its restless urban skyline; its colonial heritage subordinated to making money. In Melbourne, some of the best examples of Victorian architecture preserved in the midst of a modern city “are neither revered nor removed” and memories of imperial history are muted.

Yet, as Hunt shows in compelling tours of 10 cities, whether the colonial past is celebrated or restored, ignored or eradicated, the legacy of the British Empire is indelibly stamped on the urban fabric…

… continue reading this article at The Telegraph UK

5 responses to “How Bridgetown built the economic foundation of the British Empire – only to be discarded when the profits were gone.”