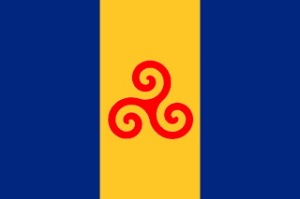 Barbados Red-Legs can now boast their own cultural flag

“I know as an outsider, no symbology can be foisted onto another culture;

yet my humble offering might spark the imagination of someone who is from there, and inspire some movement toward cultural affirmation.”

The Red Legs are a cultural community in the Caribbean island of Barbados. They are descendants of Irish and Scottish indentured servants—some forcibly enslaved by Cromwell—and remain as “poor whites” in what is otherwise a predominantly Afro-Caribbean nation. The performer Rihanna claims some family ties to this Irish-Barbadian lineage.

There are articles and photographs about the Red Leg community at photographer Sheena Jolley’s portfolio site. (Being from Appalachia, I know that outside photographers delight in capturing the most “colorful” persons and situations; and so, while the images are a snapshot of one aspect, they are only a partial picture of these human beings and this cultural community, not the whole picture.)

That the Red Leg community, despite its small size and reclusive presence, remains prominent in the Barbadian consciousness is evinced by their mention in the brief overview of Barbadian history at the Ministry of Foreign Affairs (link) and Barbados Tourism Authority (link).

A 2013 blog post by the Barbados Free Press evoked some interesting, mostly thoughtful, responses from the wider Barbadian community. (See BFP’s Irish Times: Most Barbados Red Legs have bad or no teeth. Many blind, without limbs.

Being from a “poor white” region myself—the Appalachian Mountains of West Virginia—and having designed an Appalachian flag, I’ve decided to design and offer a flag for the Red Leg cultural community. I know as an outsider, no symbology can be foisted onto another culture; yet my humble offering might spark the imagination of someone who is from there, and inspire some movement toward cultural affirmation.

The flag retains the Barbadian national colors of blue and gold—to signify that there’s no other home for the Red Legs than Barbados. Red Legs are Bajans too. Being a cultural identity, instead of a political identity, enables an individual to identify with both cultures at the same time.

Gold was also a prominent color on some historic flags of Ireland, such as the golden harp on the Green Harp Flag (link). And blue is also the color of the Scottish flag (link).

For the Red Leg cultural flag, the black trident is replaced with a red Celtic triskelion. The triskelion is an ancient Celtic symbol. The word is from ancient Greek, and literally means “three legs”.

The triskelion symbol is found on the national flag of the Celtic Isle of Man (link), which is located in the Irish Sea, between Ireland and Scotland. In the Manx Gaelic tongue, the symbol is called tree cassyn “three leg”. The trident and the triskelion both have a threefoldness.

What do you think?

An overview of the Threefold Idea
A Redlegs cultural flag