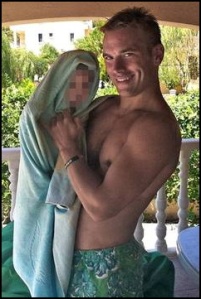 Brian Mulligan has been worth only a paragraph or two if that in the local news media since his stabbing death early Sunday morning at the tourist-popular St. Lawrence Gap, Christ Church. Today the British papers are full of his photos in Barbados and holding his new-born. (London Evening Standard: London father-of-two stabbed to death in Barbados…)

At this point, who knows what happened? Mr. Mulligan was mostly deaf after having both ears ruptured by a grenade in Iraq. He had been here for a few weeks working for Lime Telecom.

One thing we do know though: this island does not feel the way it felt even five years ago, and ignoring the problem is no solution.

Today the world’s newspapers are full of Brian Mulligan’s death in Barbados, but once again a foreign national has died at a Bajan tourist area and we see nothing in our own news media. No words from the PM or the Tourism Minister. No press conference by the police to communicate that Barbados is horrified and doing everything it can to find the culprits.

Nope. None of that… while the world’s news media goes big on the story. Just like what happened when Canadian tourist Terry Schwarzfeld was murdered.

How long until our leaders recognize that you can’t hide stuff like this anymore?