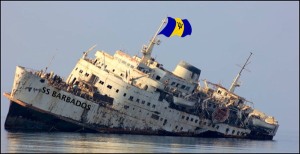 “In the Caribbean most of the leaders are old time Marxist-Leninists, who now like to describe themselves simply as socialists – because it hides the failure of those school boy idiotic idealist beliefs still held by a bundle of old rambling communists.”

We may all wake up one morning soon and find our EC dollars worth less, or even worthless – our savings and our buying power reduced. Our local pensions worth so much less, and our food bills and everything we buy costing so much more. They won’t tell you in advance in case it causes a run on the EC dollar, with people withdrawing and buying other currencies such as the US dollar etc.

The reason for devaluation will be because of the damage inflicted on the monetary system by Caribbean states that over-borrow and can’t afford to pay back those borrowings. If you consider Saint Vincent and the Grenadines, they borrowed so much money from their national bank and could not repay it that they had to sell the bank. If that bank had collapsed it would of caused the EC dollar to be damaged and would of certainly triggered the devaluation of the EC dollar.

Root causes will remain with us – because too much debt, vast regional financial imbalances, and high energy prices have actually grown worse because of fiscal ignorance, even fiscal duncemanship by the Prime Ministers.

Many of the Eastern Caribbean group are in financial trouble at this time because of over-borrowing. Prime Ministers borrowing and throwing money about on projects beyond the capacity of the state and their own fiscal capabilities, like men with no arms. Ignorant men who could not run a household budget far less manage the finances of a country.

Then again we must also blame lenders who are driven beyond the realms of reality for profit, for greed. Greedy lenders to incompetent and fiscally ignorant and stupid borrowers.

I am being kind in describing borrowers and lenders as such, because the alternative would be to describe their actions as those of criminals. Because if they knowingly borrow and lend knowing that the outcome will lead to failure of states and banking systems, that must be described as criminal.

High debt and low income must be a formula for financial disaster and ruin.

In the Caribbean most of the leaders are old time Marxist-Leninists, who now like to describe themselves simply as socialists, because it hides the failure of those school boy idiotic idealist beliefs still held by a bundle of old rambling communists.

The thing that continues to come to my mind is that this collapse of our societies as we know them may well be a part of an overall and group communist plan, or as they like to call it today, ‘scientific socialism’. A part of the plan is to bring about full blown communism in the Eastern Caribbean, a silent revolution without a shot fired [until later]. I remember well what Fidel Castro said in 1966 when he created a slogan “The duty of a revolution is to make revolution” and “The duty of every revolutionary is to create other revolutionaries.”

We must ask ourselves the question; would the collapse of the EC dollar benefit the ALBA? Would it accelerate the final solution – already agreed to adopt and fully use the ALBA banking system and the currency aptly named the Sucre [sugar]?

ALBA is an international cooperation organization based on the idea of social, political, and economic integration between the countries of Latin America and the Caribbean. The future for ALBA is agreed between all the members is to eventually become something like the European Union, or the United States.

ALBA is associated with socialist and social democratic [this description is their own spin, they mean communist minded, Marxism etc.] governments and is an attempt at regional economic integration based on a vision of socialism [communism].

Currently the member nations are Antigua and Barbuda, Bolivia, Cuba, Dominica, Ecuador, Nicaragua, Saint Lucia, Saint Vincent and the Grenadines and Venezuela. Since February  2012, Suriname is a guest country to ALBA.

In an attempt to undermine the US dollar, and I suspect the EC dollar, ALBA nations have introduced a new regional currency, the SUCRE. It was intended to be the common virtual currency by 2010 and eventually a hard currency.

On July 6, 2010, Venezuela and Ecuador conducted the first bilateral trade deal between two ALBA countries using the new trading currency, the Sucre, instead of the US dollar.

ALBA may well be ready to throw us a financial parachute, so if the EC dollar collapses, as it may well have been the original intention, what some prime ministers would call a master stroke. Just like the breaking of a national bank was described as a master stroke. We can all look forward in being paid Sucre, with no value anywhere else in the world.

It really is time to rid the Caribbean of all these old Marxist idiots, and when they are gone be sure nothing like we have experienced during the last ten years, is ever allowed to happen again.