“It will be interesting to follow the Martin Jones case through court as I can’t recall ever seeing a Barbados Police Officer convicted of corruption offenses.

They always seem to walk off free.” 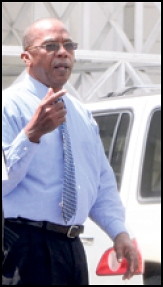 Almost two years ago a recently retired Royal Barbados Police Force Inspector, Martin Jones, was charged with perverting the course of justice in a big drug case. What happened since then? Was he convicted? Were the charges dropped?

Your guess is as good as ours because no one ever saw another reference to Inspector Martin Jones again.

Could it be that Inspector Jones is a SPECIAL FRIEND of Director of Public Prosecutions Charles Leacock? You know, just like that corrupt cop Sergeant Paul Vaughan (sometimes called Paul Vaughn) was a friend of the DPP? It’s not like it hasn’t happened before ’bout this rock…

“Well surprise, surprise! The Director of Public Prosecutions recently ordered the withdrawal of the bribery and perverting the course of justice charges against his friend, Sergeant Vaughn.

No public explanation was given – and the cowardly lapdogs in the Barbados news media never asked a single question even though the whole thing stinks to high heaven.”

… from the BFP article Secret withdrawal of Bribery Charges against Barbados cop stinks of corruption at the highest levels.

So let’s see if any BFP readers know what happened to the corruption charges against Barbados police inspector Martin Jones.

Ex-cop on bail (read the story at The Nation here)

A retired police inspector accused of perverting the course of justice in a drug trafficking case was released on bail yesterday.

Martin Jones appeared in the District “A” Magistrates’ Court, and after strong objection by his attorney to a proposed condition by the prosecution, the former lawman will not have to present himself to a police station.

Jones, of Wilcox, Christ Church, was not required to plead to the charge that between October 24, 2009, and March 10, 2010, he committed a series of acts, which had a tendency to pervert the course of justice, in that he facilitated the transfer of the criminal case against Frederick Ryan Grant from District “B” Magistrates’ Court to the District “A” Traffic Court, which resulted in no criminal conviction for trafficking being recorded against Grant.

Jones was also accused that between October 24, 2009, and March 10, 2010, he did a series of acts which had a tendency to pervert the course of justice in that he facilitated the process by which the order of the court for forthwith cost for trafficking was not complied with by Grant.

5 responses to “What happened to corruption charges against Barbados police inspector Martin Jones?”