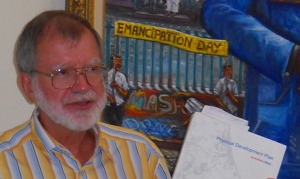 A Canadian Court has sentenced former newspaper editor and Barbados tourism promoter Bob Verdun to 90 days of house arrest and other penalties for violating a court injunction prohibiting his commenting about Robert Astley, the former Clarica Insurance executive.

Verdun was a fixture in Barbados for a few years as he tried to push the aborted Four Seasons project and other developments. He became a bit of a hot topic in Barbados when he gave a speech that some folks took as racist. Up in Canada Verdun got hit with a $650,000 judgment for defamation. Wuhloss!

What does this mean for Barbados and Mr. Verdun? Does it matter? Mr. Verdun was all about resuscitating the failed Four Seasons Hotel project and that is not going to happen.

While we at BFP are all for free speech and get into furballs with the government ourselves, the Canadian court says that Verdun crossed the line.

Did Verdun really cross the line or are there other factors at play? Did the court hear all the evidence or was some proper and true evidence left out because it wasn’t printed on the right colour of paper? We at BFP are not so quick to condemn Mr. Verdun for speaking out. Then again, it’s not us doing 90 days of house arrest. According to Wikipedia, Verdun has been a strong supporter for shareholder rights and a positive influence upon Canadian law.

Will Verdun return to Barbados? Does he have the money to make the trip? Does anyone care now that the Four Seasons is dead, dead, dead and dead again?

Here are some past BFP stories about Mr. Verdun…  END_OF_DOCUMENT_TOKEN_TO_BE_REPLACED

Filed under Barbados, Barbados Tourism, Freedom Of The Press