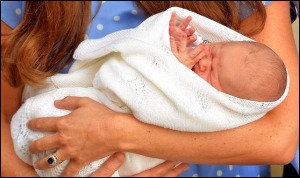 Kate and, what’s his name? Oh yeah, William. Anyway they are a nice young couple across the pond and they have just had their first little one, a boy. His name is George Alexander Louis. (Yahoo! News story here)

George for his great-great grandfather, Louis for his great-uncle (?) who was murdered by the Irish Republican Army and Alexander for some distant relatives in Scotland.

Unlike many other children born on the same day in Barbados and around the world, George will never be hungry for long. He will never have malaria or gum disease. George will never experience parasitic worms in his eyes or have trouble finding clean water to drink.

George will have soap available to him every day. A good school and tuition for anything he wants to do are a given. Should he ever have a health problem it will be spotted as early as humanly possible and then treated immediately with the resources of an entire nation. George is already wealthy and as he grows he will have real power and authority (the two are different, you know). As with his wealth, George won’t have to earn that power and authority because it will simply be handed to him.

This little one is truly blessed, and good for him and his proud parents.

George’s task now is to use his blessings to change the world for the better. That’s up to him – he can work hard at using his position to advance the human race, or he can choose to do little or nothing in that regard.

And to those who begrudge the fact that little George has such a good start in life – I remind you that the privileged children of the Bajan political class (and elsewhere) are born with the same silver spoon of assets, family influence and political ties to help them along in life. The difference is only in the size of the assets and influence.

Some of those who are critical of the Royals tend to forget that Barbados has its own royal class, and if the test is to judge how much good they have done with their blessings, our island’s royal class has already failed the test.