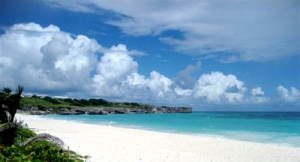 While the talk of the day generally seems to be restructure or improve productivity in the tourism sector,  I have seen no new ideas on how that is to be done. Government officials and the Tourist Authority keep talking about finishing the Four seasons or Beachlands project or about expanding the port facility which means the focus will continue to be on the high end market, the same old path that has already reached its potential, and is a dead end therefore. Last year the Barbados Free Press picked up my story of 22 February 2012 where I said Barbados is a paradise lost if Barbadians don’t wake up to the fact that a whole new vision needs to be developed for tourism in Barbados, and that the middle class market was the future of tourism. The ideas below are my attempt to show the way forward.

“The airline industry has shown that a dynamic or variable pricing strategy over time is the means to a higher load factor with fewer empty seats… Surely the same strategy needs to be applied to the accommodation market here in Barbados.”

Part One  – Market to the Middle Class

On February 25th, 2013, Dr. Delisle Worrell, Governor of Central Bank of Barbados, gave a speech “Keep pace with the competition” stressing that the tourism sector should improve its productivity. In this speech, Dr. Delisle Worrell was quoted as saying “ So long as our prices are right we can sell to our full capacity” thus avoiding empty hotel rooms due to overpricing, or leaving tourist dollars in their pockets due to under pricing.

The idea that like the temperature of mama bear’s porridge, there is a price that is just right is erroneous. If the right price could be found, there wouldn’t be a 62 percent room occupancy rate over the year across the  region, and the government entity NPHL wouldn’t be unhappy that the Hilton Hotel, a 4.5 star property, was depending too heavily on the lowest category room rate to fill its rooms. But the Hilton is correct for the management has obviously realized there are not enough rich persons, the so called one percent, to fill the rooms at over $300 US dollars per night in winter.

What has amazed me is that so many hoteliers or guest house operators in Barbados maintain fixed seasonal daily rates even in the face of empty rooms. It seems as if the idea of providing weekly or monthly discount rate for tourists who will commit to a longer stay is not thought necessary here. Yet the airline industry has shown that a dynamic or variable pricing strategy over time is the means to a higher load factor with fewer empty seats. In economy class, a first rate is set which captures all those willing to pay that rate, after the rate is discounted for a time to catch the next income segment willing to afford that rate, and after returned to the higher rate to catch late-comers, then the rate is discounted further to fill more seats and the process is repeated again as needed. Surely the same strategy needs to be applied to the accommodation market here in Barbados.

In my opinion the root of some of the difficulty in the tourism sector is that the  government continues in the mistaken belief that because Barbados does not have capacity for mass tourism, it must focus on high-end tourism instead.

END_OF_DOCUMENT_TOKEN_TO_BE_REPLACED

The winner travels the world for 6 months to 25 destinations of their choice and blogs, films and photographs everything they experience along the way. This is a huge opportunity to market Barbados globally and I am trying to use this to my advantage.

I have pledged $US 5,000 to the Diabetes Association of Barbados if I win this competition, to raise awareness and support a cause dear to my heart.

I have also reached out to friends who are involved in non-profit organisations & charities around the world, so that I can visit their countries and connect with their cause. If I win, I’ll be featuring their cause, volunteering wherever I’m needed and creating as much hype as possible. I’d like to use this publicity to benefit as many people as possible.

My video on Barbados has received a lot of support so far, but I need to make it to the Top 5 to become a finalist. I’m far from making the top 5 number of votes and I’m therefore asking that you PLEASE share & spread this message to as many people & businesses around the world as possible so that I can make it to the top 5 by March 31st.

2. Scroll down until you see the social media box