The magical world of Barbados government tourism statistics and expenditures

So many questions, so few answers. So little planning…

The Barbados Government’s Budget setting out the Estimates of Expenditure and Revenue for the financial year 2013/2014 lists that ‘a subvention of $101.7 million has been provided to the Barbados Tourism Authority to facilitate marketing and promotion’.

At first it seems a simple enough stated intent, but what does it really mean?

‘Marketing and promotion’. What will ultimately be spent on these two critical functions after all other expenses are taken out?

Perhaps even more pertinent, will the whole budgeted amount even actually be available to the organisation? Or will they become cash starved again far before the end of the next financial year – contributing to another near devastating fall in arrival numbers?

Bearing in mind the fragile state of the industry, wouldn’t it also be wise to ensure that the private sector is fully informed of any recovery plans to ensure limited available resources from them is not squandered by duplicating efforts?

I recently saw a prediction that 2013 would end the year ‘flat’ in terms of arrivals, but that would mean a growth rate of more than 6.2 per cent this year alone, just to make up for the loss in 2012. And ‘a rise in tourism figures by the end of March 2014’ was also forecast.

Given that somewhere between 12 and 20 hotels are already up for sale, I seriously wonder how many more can economically hang on until even marginal viability returns.

During the budget debate the Minister Of Finance anticipated a 0.9 per cent growth in tourism during the financial year ending 31st March 2014. Is that enough to avoid further closures and lay-offs? That is on top of what so far has been a very disappointing peak winter season, compounded by a virtual moratorium on sustained marketing for several months.

Frankly, I have never been a great fan of predictions. I would rather rely on strategies and courses of action which incorporate a high degree of possible success – strategies that actually make things happen.

Also the figures when compared above start to confuse me. Yes of course there is a difference with a datical and fiscal year, but in this case they both possess three of the much higher yield critical winter months; January, February and March.

Once again, we are left asking so many questions and obtaining so few answers. 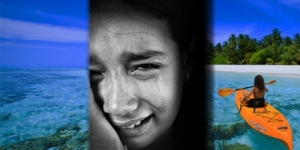 Why vacation where women are second class and punished for being women?

The photos of the Maldives are always so beautiful – deep blue skies, crystal clear water, calm seas and clean tranquil private resorts – but those tourism adverts hide a seething Islamic fundamentalism that has taken over the government and the island nation’s culture.

Beautiful islands, yes – but hostile to women, westerners and all non-Muslims that they call infidels. Be prepared to vacation in a culture of hate where the government and many in the population conceal their laws and feelings only long enough to grab your tourism dollars.

Pity the women born in The Maldives. Only Muslims are allowed Maldives citizenship – all other religions are barred from being citizens even if born in the Maldives.

Why should women tourists boycott the Maldives?

Girls are still married off at nine and ten years old, young women are often whipped for having sex outside marriage, rioters in the streets broke into the museum and destroyed exhibits of non-Muslim history and culture – smashing thousand year old Buddha statues and burning religious books.

The Maldives: where you will be jailed if they find you with a bible or an icon of Mary on your computer.

The Maldives: where couples are offered marriage renewal ceremonies on the beach with the Muslim Imam saying the ceremony in the local language. Couples smile at each other – not knowing that the Imam is calling them swine and infidels and saying worms will come from the husband’s penis because he is not Muslim. The resort staff nods and smiles to complete the marriage renewal farce. What an indication of the inner feelings for western tourists!

As a woman, choosing between Maldives or Barbados for next year’s winter holiday, there really doesn’t seem to be much thought needed, does there?

How about a Maldives Wedding?

If you’re still not put off by the state of the world in The Maldives, how about planning to get married or renewing your vows there? You too can have a wonderful ceremony…  END_OF_DOCUMENT_TOKEN_TO_BE_REPLACED