Attacker shouted something about Chris Brown

Rihanna was not seriously injured in a fall caused when a madman attacked her as she was leaving a London club. The man threw a full drink bottle at Rihanna after shouting something about Chris Brown. Rihanna fell trying to avoid the projectile (which by some reports did not strike her) and had to go to hospital to be treated and then released.

The attacker was not apprehended, which is a little surprising.

“Independent candidates are the beginning of the next wave of political development in modern Barbados.”

A Role for Independent Politicians

The author prefers to remain anonymous

The political landscape of post-independence Barbados has been, and continues to be defined by an unhealthy rigidity perpetuated by the two-party system. In the midst of the General Election of 2013, this model of governance stands outdated and ineffective to the needs of a modern Barbados. The reality of this election is that the Barbados Labour Party and the Democratic Labour party no longer enjoy an overwhelming vote of confidence by Barbadians.  Record levels of dissatisfaction with both major political parties have been noted and continue to increase rapidly throughout this election cycle.  The choice in the frankest of terms to the average voter is the choice for the lesser of two evils.

Modern Governance and Democracy ought not to and can no longer hinge upon the choice of a lesser evil.

In a country replete with a cadre of intellectual, capable and hardworking individuals the choice must be a choice of, and combination of visionaries that reflect what is genuinely best for national development.  When almost half of Barbados reject both the Democratic Labour Party and the Barbados Labour Party and would vote for an independent candidate if given the opportunity, it is evident that Barbadians are dissatisfied with the limited options available.

The distrust, reluctance and unease with which the average Barbadians view politicians of both major political parties prevent our best minds and hands from entering into this aspect of national development. This cannot be acceptable. The reality of a small island developing state such as Barbados is that we need all hands on decks and we cannot afford this suboptimal use of our resources. The reality is that we need a collection of voices to make Barbados work for every Barbadian. The simple reality is that Independent voices are needed to address the magnitude of the challenges facing us. END_OF_DOCUMENT_TOKEN_TO_BE_REPLACED

Nation – Cadres Poll: When you know both devils 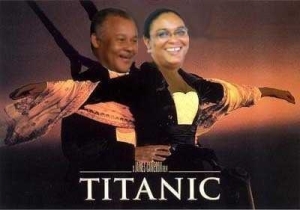 Mia thought they were in love… but Owen was ready to give her a shove!

There was no poll option for Mia Mottley as Prime Minister: just like in real life. Also just like real life about 30% of the respondents won’t say or are voting independent. As our own Barbados Free Press poll showed last October, Bajans have had it with the two old parties but need good people to stand as independents during the election. (See BFP’s 38% of Barbados voters would vote for an Independent)

In the middle of the weekend poll results we also had the revelation that Owen Arthur tried to get Freundel Stuart and the DEMS to take Mia Mottley. As proof of the offer, Stuart produced a note he said Arthur sent to him. And once again Bajans are reminded that politicians flow between the two major parties because there is no real difference between the two. It’s all about which gang you hang with, not that the two gangs are really different at all. (See Barbados Today’s Arthur’s note)

Bajans know both of the offered choices: BLP/Owen Arthur or DLP/Freundel Stuart, so it’s not about a devil you know and one you don’t. We’re all too familiar with both devils and the two devils are the same. There is no difference, not a whiff of real difference, between the Dems and the Bees or their leaders.

Get this straight folks…

It doesn’t matter if the DLP or the BLP are elected because the end result of a DLP or a BLP government will be the same for Barbados and Bajans.

That’s why you must vote independent if you have the chance on Thursday: vote for anybody just so long as they are not DEE or BEE.

As we have now crossed the halfway stage of the winter tourism season, it is looking increasingly doubtful that any predictions of a strong performance in this sector will become a reality.

An overall fall of 8.2 per cent across all markets, but significantly concerning are the numbers from Canada, which saw a 18.4 per cent fall when compared with the same month in 2012.

Whoever assumes the office of Government later this week will finally have to take a long and hard look at current marketing strategies. Even if this is deemed an imperative, there is very little likelihood that any measures implemented at this late stage will make an iota of difference before April 15th.

So the next challenge is the eight long softer summer months.

After five years in power the outgoing administration had seemingly abandoned any attempt to fulfill their previously stated 2008 manifesto objective: to restructure the Barbados Tourism Authority.
This despite an overwhelming mandate to effect change – yet surprisingly it’s popped up again in the 2013 manifesto.

I think the question has to be asked: Are these goals being successfully achieved in the most cost-effective and productive ways? Clearly there are challenges but every other regional destination is also experiencing the same difficulties. END_OF_DOCUMENT_TOKEN_TO_BE_REPLACED