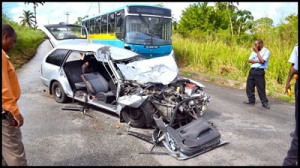 What is the likelihood that the driver of a bus carrying 46 students was hung-over from a late night drinking session? Your guess is as good as mine, and as good as the guess of the police officers who investigated a fatal collision on Friday morning.

How much the bus driver had been drinking the night before, if anything at all, will remain a guess because both DLP and BLP governments in their time promised to implement breathalyzer equipment and legislation, but did not do so. Our police therefore have no law allowing them to administer a breath test to drivers involved in serious collisions. Third rate. Third world.

After at least 15 years of broken promises, we have to conclude that our politicians don’t want effective anti-drunk driving laws on the books.

Here are a few of our previous stories on this topic. Have a read and ask yourself how the DLP differs from the BLP when it comes to minding the safety of our children as they travel to school each morning…

December 29, 2009: Another Drinking Driver gets off easy because Barbados Police lack Breathalyzers

16 responses to “Another road death: Barbados Police cannot test if school bus driver had been drinking”