Where did all the DLP UK chapter money go?

Some friends of Barbados Free Press in the U.K. produce an irreverent newsletter called Ping Yark – published by homesick Bajans for other homesick Bajans. Leigh Bourne and a handful of others who refuse to surrender to Londontown publish Ping Yark quarterly, or to be more accurate, “more-less” quarterly. Holding the newsletter in your hands, and turning each page, you are rewarded with memories, current politics and many oh-so-secret secrets of the elites.

Today Leigh and company are at it again and their lead story is about the disastrous visit of Prime Minister Freundel Stuart to the DLP’s U.K. branch.

Hey… you never saw this reported in the Bajan newspapers…

“TO THE MORTIFICATION of the DLP UK branch powers that be… to call their recent dinner dance a ‘FUBAR’ would be a massive understatement. The DLP UK train didn’t simply tap the buffers … it was driven blindly at breakneck speed into the immoveable object – this FUBAR is the talk of the town. But it all started out so positively … so what happened? This could be a very brief article cos in short, Anderson (champagne tastes and sweet water pockets) Connell … happened!”

“AND SO IT HAS COME TO PASS that yet again ego and a sycophantic desire to impress have outweighed the funding ability of the group. History has repeated itself and this time in the presence of Prime Minister Freundel Stuart, his entourage and High Commissioner Anthony Arthur. . Embarrassing or what ! Its not hard to imagine the shortfall when at a £60 per head function less than 100 patrons attend.. and were reliably informed that one supporter alone was responsible for nearly half that number. We’ve not yet ..and probably never will see the financial breakdown but it appears that rubbing shoulders and photo opportunities carried a higher priority than the welfare and or future prospects of the group.”

… from the October 2012 issue of Ping Yark (download below) 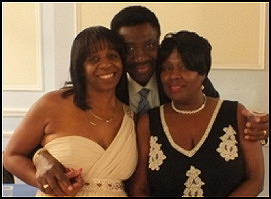 How many women does one man need?

Amongst a multitude of other subjects, the latest Ping Yark also covers Unity’s Fundraiser at Annerley Town Hall a few weeks ago. Hmmmm… from the photos it looks like certain folks enjoyed themselves and made new friends. Oh Yes! Ya can take de Bajan from Bim, but ya can’t take Bim from de Bajan!  🙂

And yes, it’s time for Leigh and the gang to head over to WordPress.com and fire up their own blog.

The DLP has been in scandal mode in the U.K. for a long time…

“Jaws outside the meeting dropped too when it was revealed that despite all the balls, dinner dances, dances, coach trips and excursions organised by DLP UK down the years – not a single penny in donations has been received by DLP HQ since 1986. Stark contrast to the New York branch it must be said. Dutiful fully paid up members here are right in asking – where did all the money go ? Who had / has it ?”