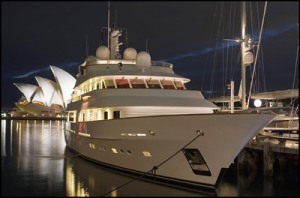 After reading ‘Confessions of an Economic Hit Man‘ it is always interesting to see the connections surface – even if I don’t understand them and don’t have the knowledge to sort the meaningful observations from the mundane.

So Port Ferdinand developer Gary Morse gave a million dollars to the Romney campaign and also hosted a little unannounced get-together for billionaires, Romney relatives and politicians on his rowboat… does that undermine democracy or is it just the way things are?

And while our own DLP and BLP politicians probably don’t receive a million US dollars at one go, you can bet their palms have been filled in some form or another, whether they admit it or not. The difference, of course, is that the US election financing laws put structure and rules on elections and campaign money. In Barbados we have no rules and zero transparency when it comes to political financing… and that is the way that Owen Arthur, Freundel Stuart and their corrupt cabals like it!

‘A gentleman’ – Brian Popple passes while vacationing in Barbados. Mrs. Popple praises ‘so many’ people who helped her.

When her husband of 50 years passed away on vacation, Bajans helped Pamela Popple

It is natural that complaints and criticism dominates the news stories everywhere. That is just the way of things with the news media.

But it is also true that when guests in Barbados encounter trouble, illness or pass away while on vacation, good people in Barbados help as much as they can. These stories of kindness and going the extra distance by good folks seldom make the news, so when possible Barbados Free Press likes to draw attention to what we believe is a core Bajan quality: kindness and assistance to strangers in need.

Our heartfelt condolences to Mrs. Popple, and to family and friends of Brian Popple.

A GRANDFATHER who died from heart failure while on holiday in Barbados has been described as “a gentleman”. Brian Popple, of Hillside Gardens in Brockham, was on the Caribbean island with his wife, Pamela, when he died. He was 69. (photo above: Brian Popple)

“He was a lovely husband, a lovely father and a lovely grandfather. I still can’t believe he is not coming back.”

His children flew to Barbados the following day, and his body was flown home to the UK on October 2. Mr Popple was a director of Skyline Bookbinders in Vincent Lane for 28 years, had been married to Mrs Popple for 50 years, and had two daughters and four grandchildren.

Mrs Popple said: “He was a good man, everybody said he was a gentleman. We had some fabulous holidays together but we always went back to Barbados; we had a timeshare there and it was our favourite place.

“I don’t know what I would have done if it had happened on another island.

“There were so many people in Barbados that helped me while I was over there.

“We were childhood sweethearts. He was the only boyfriend I ever had. We loved each other to the end. We were soulmates and he was my friend.”

Read the full story at Surrey Today: Brockham grandfather dies from heart failure while in Barbados with wife