Watch this video. Give me your money.

If only success was as simple as computer-generated reality, developers wouldn’t have to worry about environmental studies and planning permissions yet to be obtained, financing in these disastrous times, infrastructure guarantees by a flat-broke government and construction start promises hanging tantalizingly just out of reach.

If computer art was reality, prospective owners wouldn’t have to worry about turning over tens of thousands of dollars with no consumer laws or escrow accounts to protect them while sales people show slick little presentations designed to target emotions and leave caution behind.

Ecoterra International Corporation and Pure Beach Resort have it right though: lots of tranquil beach flybys while a handsome barefoot cello player sits in the surf playing ‘Over the rainbow’… Just imagine! Look at this paradise… beautiful sunset, clean water, green trees and the soft wind playing in your hair.

Oh ya… get me my cheque book honey. We have to have a piece of this before someone else buys it and we lose out…

It just feels so right, here in Barbados… 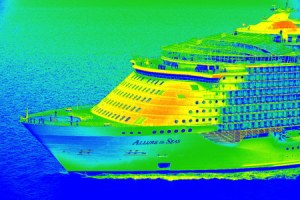 A few days ago on Sunday September 16, 2012 at about 9:30pm a passenger was seen falling overboard from the world’s largest cruise ship, Royal Caribbean’s Allure of the Seas.

The Allure of the Seas never called the Coast Guard for assistance in searching until two hours later. By that time it was far too late for the lost passenger.

When BFP’s own pilot Robert heard about the incident, his first comment was surprise that Royal Caribbean built the world’s biggest and most expensive cruise ship – at a cost of some US$1.2 billion dollars – and didn’t include an onboard helicopter and alert flight crew to handle rescue situations and medical emergencies. The initial cost and ongoing expenditure would be nothing in relation to the overall operation, but Royal Caribbean made a decision to exclude the helicopter and instead build more cabins. Similarly Royal Caribbean does not maintain a quick launch rescue boat with a standby ready crew on alert. “Profits over passenger safety” seems to be the Royal Caribbean motto even at the design stage.

The outrageous failure of the Allure of the Seas captain to call for help for a passenger overboard and the failure of planning, design and operations in dealing with passengers overboard is just the latest in an ongoing series of cruise disaster stories. Cell phone cameras and internet access means that every passenger becomes a potential journalist able to broadcast any failure or disaster: and broadcast they do!

The cruise industry… for years has maintained that cruises are one of the safest ways to travel, and that a person is far more likely to be a victim of crime at home than aboard a ship.

Crime statistics tell a different story, according to Ross Klein, a professor of sociology at Memorial University of Newfoundland in Canada.

“It is not safer than being on land. Passengers need to know that they are at risk,” said Klein, who has written four books on cruise safety and testified at U.S. congressional hearings on oversight of the cruise industry.

It seems like every week brings new reports of cruise ship negligence and operational decisions that compromise passenger safety. Whether it’s the rape of passengers by crew, strange disappearances, murders, virus outbreaks, collisions or a complete lack of reasonable security, policing and medical standards and resources, the cruise industry has found that passenger safety and onboard crime issues are starting to attract the attention of passengers, employees and government authorities. END_OF_DOCUMENT_TOKEN_TO_BE_REPLACED