“Through her endeavours, both with her personal involvement and charitable contribution, Eva and Hans Kristian “saved” thousands of lives – tragically not her own. This is a stark reminder that the illness of addiction knows no social class or gender.”

A message from the Kemeny family

The Kemeny family is deeply distressed by the tragedy of their daughter, Eva’s, death and have seen the widespread worldwide media coverage of her difficulties over the last few days. Eva would have wanted the memory of her life to be used to benefit others facing similar addiction challenges in their lives. The Kemeny family hopes this tribute will be used to draw attention to the tragedy of drug addiction and to generate awareness and financial support for this cause in the future. In due course they will launch a foundation.

Eva Louise Kemeny was born on 7 March, 1964 exactly nine months and one week after Nancy and I were married in Goldsboro, North Carolina on 1 June, 1963.

Eva was born in the Matilda War Memorial Hospital on the Peak of Hong Kong. Our darling Eva was literally delivered by me and a 16 year old assistant nurse, since the doctor had failed to show-up. When Eva was born, I wrapped her up in a towel, still attached to Nancy’s umbilical cord, and held her up to show Nancy our beautiful first born. Nancy said, “Oh, a boy!” And I said, “Not exactly, what you’re seeing is the umbilical cord.” Thus Eva entered dramatically into our world.

From Hong Kong we moved to Sydney and from there to Milan where her sister, Be, was born. We then moved to Rome in 1967, where Eva attended the original Montessori Nursery. In 1970 we moved to London and Eva first attended Garden House School, and then later Queens Gate, followed by the American School in London. She was an immensely bright, loving but very shy little girl.

We think she started experimenting with drugs in her late teens to overcome her shyness. The drug dependency impacted poor Eva, and her attendance, at Occidental College in Los Angeles.

After attending many drug rehabilitation centres in the USA and the UK, Eva finally recovered in the late 1980’s. Her recovery was strong and, as is customary in the 12-Step Programme, she went around London and the UK sharing her life and experiences to explain that recovery is possible and to give hope and support to others. This became a major defining endeavour in her short life: to help others, especially those with drug addictions. 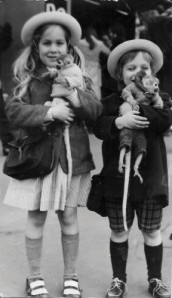 Eva (left) and sister Be

Before her marriage, Eva worked for two years in John Aspinal’s London office, as his assistant, where her duties included buying exotic fruit for his large collection of gorillas. She married Hans Kristian Rausing on 16 October, 1992 at the Swedish Church in London. The service was officiated by the Archbishop of Sweden, assisted by Reverend Lennart Sjostrom, the former Rector of the Swedish Church in London. Recently he commented: “I just saw two people who were immensely happy and so in love, and I remember the looks on their faces as they exchanged their vows and promised to love and honour each other.” Reverend Sjostrom also baptised their four children. After her marriage, they attended Richmond College, where Eva read Economics and Hans Kristian read English literature. She also attended the London School of Economics for a short time.

Eva played a pivotal part in her life-long vocation in helping those with drug addiction. She joined the Board of both Clouds and Chemical Dependency Centre in the early 2000s, which later formally became Action on Addiction in 2007 after merging with a third charity. It is a national organisation that provides direct and indirect help to both addicts and their families. The indirect help it provides includes training for professionals, counselling, research and campaigning support. Its direct help includes residential and out-patient treatment to those suffering from addiction, in addition to offering support to their families.

Eva’s particular interest within Action on Addiction was Hope House, a specialist unit for women to deal with complex issues – not just drug addiction, but eating disorders, mental illness and domestic abuse. Eva and Hans Kristian were adamant that no one should be turned away from treatment for addiction. They passionately (and anonymously) supported ‘Charity Funded Treatment’ for those that could not get statutory funding or raise the funds themselves.

From early 2000 up until her death, Eva was involved with RAPT, Rehabilitation for Addicted Prisoners’ Trust. Although Eva was not on the Board or a trustee and had no official capacity, she was a life-time supporter and dedicated her time to visit women’s prisons, such as Send.

Tristan Millington-Drake, who worked with Eva on her charitable activities, remembers the caring attitude she took to her work: “She was never afraid to visit women addicts in prison and in connecting with them she was always open about her own struggles in the hope that she might help them.”  Tristan remembers her love of cats which even extended into her support for the Animals at War memorial in London’s Park Lane: “She was always mischievously trying to get them to include cats in the memorial, despite it being pointed out to her that cats didn’t go to war.”

Eva was also a patron of the Mentor Foundation, a charity purely concerned with drug prevention which was founded in the early 2000s.

Ten years ago Hans Kristian and Eva established Verdun in Barbados, a full 12-Step Recovery clinic which remains unique in the Caribbean. Verdun has treated over 2,000 local Bajan people since its foundation.  Eva and Hans Kristian have essentially been the only benefactors of this facility. There are plans to develop a women’s unit, as it had become a male-only facility.  The charity also set up a Halfway House which provides training and rehabilitation to reintegrate recovering addicts into society.

Through her endeavours, both with her personal involvement and charitable contribution, Eva and Hans Kristian “saved” thousands of lives – tragically not her own. This is a stark reminder that the illness of addiction knows no social class or gender.

As Nick Barton, Chief Executive of Action on Addiction, said recently: “Eva worked tirelessly for years, without any desire for public recognition and despite her own health issues, to help people and charities in the addiction field through her wonderfully generous support.”

“Eva was much admired for the very personal commitment shared with her husband Hans Kristian in supporting a number of charitable causes, including several organizations in the addiction field.”

Eva and her husband were also generous patrons of many other good causes. She had a sharp and intelligent wit, and her sparkling eyes often betrayed what she was about to say. Her beautifully written messages and emails were in equal turns both provocative and humorous, but always a pleasure to read. The love she had for her children was the most dominant theme in her life, and one which occupied her every day. Even in the depths of her despair she always worried more about the happiness and well-being of others. At the time of her death her over-riding concern was for the safety of her beloved husband, for whom she interrupted her own treatment to return to London in an attempt to take him back with her to California, but tragically to no avail.

We shall always remember Eva as a beautiful, generous, and fun daughter, wife, mother, sister and aunt. Eva and Hans Kristian adored each other and their four beautiful children. When not in London they would have family holidays with their cousins and extended family, without any glitz or glamour.

Eva and Hans Kristian were a devoted and loving couple for the 21 years they spent together. They benefited thousands of lives through their personal involvement and philanthropic activities. They bravely battled their demons and supported each other and Eva will be a devastating loss to our beloved “son” Hans Kristian, whom we love unconditionally with all our hearts.

“A loved one is a treasure of the heart and to lose a loved one is like losing a piece of yourself. But the love that this person brought you…did not leave, for the essence of the soul lingers. It cannot escape your heart, for it has been there forever.”

Eva is survived by her beloved husband, Hans Kristian Rausing, their four children, her sister, Be, and parents, Nancy and Tom Kemeny and an extended American and Swedish family.

O, G-d, full of compassion. Thou who dwellest on high, grant perfect rest beneath the shelter of Thy divine presence among the holy and pure who shine as the brightness of the firmament to the soul of my beloved Eva who has gone to her eternal home.

Mayest Thou, O G-d of Mercy, shelter her forever under the wings of Thy presence, May her soul be bound up in the bond of life eternal, and grant that the memories of my life inspire me always to noble and consecrated living. Amen.

7 responses to “In memory of Eva Louise Kemeny Rausing”