Former Barbados Housing Minister Gline Clarke says take land from the rich and give it to the poor – Refuses to answer how he lived on expropriated land! 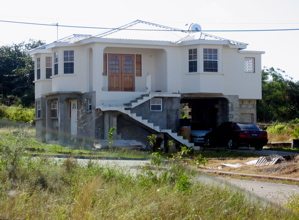 What do you call a Minister of Government who lives in a house built on land expropriated for ‘public housing’ by his own government? You call him corrupt, that’s what!

This is the same Gline Clarke, the same Barbados politician who announced to the world last August that rich whites aren’t welcome in his Barbados…

“Mister Speaker, I am appalled. I am really appalled that a government in two thousand and eleven would be dealing with a group of white, conservative, rich people.”

MP Gline Clarke, former Minister of Public Works, expresses his disgust in Parliament that the current DLP government would do business with people of the white race.

Gline Clarke is back at it again – telling the local news media that government needs to be more ‘progressive’. By that he means that the Government of Barbados should take land from private owners through force of law, not pay them for it (or delay for a decade or more as is usual) and then build houses on the land for Members of Parliament and their mistresses – just like Clarke did for himself. Not that you’d know that from the island news media.

Who would begrudge a poor man like Gline Clarke a place to park his Mercedes?

A call to nationalize large tracks of privately-held land should attract foreign capital, do you think?

Clarke is a moron in election mode!

Man, this corrupt Owen Arthur gang never changes – but if you vote BLP, at least you know what you’re getting! It’s almost like they are honest because they tell you up front that they are dishonest!

21 responses to “Former Barbados Housing Minister Gline Clarke says take land from the rich and give it to the poor – Refuses to answer how he lived on expropriated land!”