Racist Barbados Member of Parliament at it again 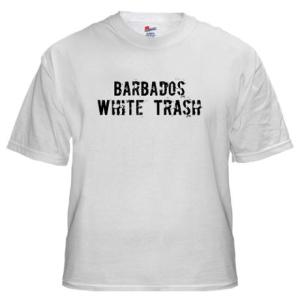 Quite a stink followed with both BLP and Government spokespeople blathering that Gline didn’t really mean it like that.

Except… he did mean it exactly like that. And… he’s just doubled down on that racist card to let the world know it.

Now Mr. Clarke is complaining that WHITES!!!!  GOOD LORD!!!! THOSE DAMNED WHITES!!!! have been receiving some construction contracts from the Barbados Government.

What’s next? Will the DLP government will be giving contracts to Indian Guyanese and Chinese Cooliemen? Disgusting!

Clarkes’ racist comments are nothing in the grand scheme of things. He builds on a proud tradition started years ago by Barbados politicians who learned that racist comments against whites, Indians and Chinese get votes. It is a sad legacy 50 years on and a sad message to the world that Bajan politicians talk this talk with no repercussions whatsoever. Worse… they truly believe it. They live in a racist world of their own construct where Bajan or not – ‘whites’ are the enemy.

Not even Rihanna telling the whole world that she was bullied in school for being ‘white’ stopped this racist nonsense. There are very few steps between Gline Clarke complaining that the government is giving construction contracts to ‘whites’ and Bajan citizens’ comments that murdered Canadian tourist Terry Schwarzfeld was ‘white trash‘.

It’s all the same.

You know why Gline Clarke talks of the whites? He does it to divert attention from the fact that as Minister of Public Works Clarke lived in a home built on land that was expropriated from private ownership for (ha ha!) ‘public housing’. 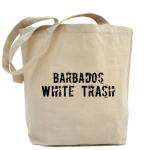 Our 100% cotton canvas Barbados White Trash Tote Bag bags have plenty of room to carry everything you need when you are on the go. They include a bottom gusset and extra long handles for easy carrying.
– 10 oz heavyweight natural canvas fabric
– Full side and bottom gusset
– 22″ reinforced self-fabric handles
– Machine washable
– Measures 15″ x 18″ x 6″

Order at the CafePress! (Gline Clarke would approve!)

Nice going Mr. Clarke. Your racist comments really play well on the world stage as Barbados seeks international investors looking for a stable and friendly place to put their cash.

So sorry, but we have to reprint the entire Nation article here because that paper makes a habit of changing and removing articles to suit changing political agendas. Please read the article at the Nation website at this link…

FORMER CABINET MINISTER Gline Clarke says that black contractors are suffering in this country and the major contracts from the Democratic Labour Party (DLP) Government are going  to “a certain class of people”.

“We are seeing a Government that is prepared to give every contract to a certain class of people,” he charged.

“I am no racist but I am seeing the Democratic Labour Party giving big contracts to the Whites and we must be prepared to say it.

79 responses to “Racist Barbados Member of Parliament at it again”